Whoever cooked the first mushroom, and decided it was tasty enough to be included in the vegetable group, was a brave person.

They are not even a true plant – rather classified in their own biological kingdom.

Yet, edible funghi have a strange, natural beauty that compares to nothing else we eat.

To describe the characteristic flavour we use terms such as earthy, nutty, and peppery, depending on the type of mushroom selected.

Mushrooms appear as many shades of brown, from white buttons to the more mature Portobello, to Asian straw, shitake or oyster (the more colourful types are the poisonous versions).

Within the family of nearly 1,000 there are only a handful that are farmed – and yet this is where we get our biggest supply.

When the deciduous leaves begin to colour, and there is still a little warmth in the air, fresh mushrooms are at their peak.

More often than not mushrooms these days are gathered from green grocers rather than grassy fields, but the autumn season is the true time when fungi lovers prepare the cast iron pan with a splash of oil and a pinch of salt for there is nothing like mushrooms on toast to scream a change in season.

As always fresh is best, a newly plucked ‘shroom has a high level of hydration – they are in fact about 80-90% water.

For every hour that the engorged fruiting spore is detached from network of rooting fibres, it loses exponential amounts of water, and thus has a very finite life span. T

he average mushroom from the time it is picked until the time it is past its best is about 4 days. The exception to the rule is when like shitakes, chanterelles or porcini they are slowly dried so the natural enzymes, amino acids and sugars are stored and intensified when reconstituted.

How to pick and store

Choosing fresh mushrooms out of the box and off the shelf, is straightforward, look for clean, plump, unblemished, clear colour, not slimy, nor wrinkled.

Refrigeration will slow the mushrooms metabolism, but will only ever give another day or two of life as long term chilling will dehydrate rather than reconstitute.

The age old habit of keeping mushrooms in brown paper bags or boxes filled with straw is still regarded as the best way to store either at room temperature or in refrigeration.

A shrivelled mushroom will do nothing for a dish, imparting a base dirt flavour rather than earthy, so best to discard and go source fresh ones instead. 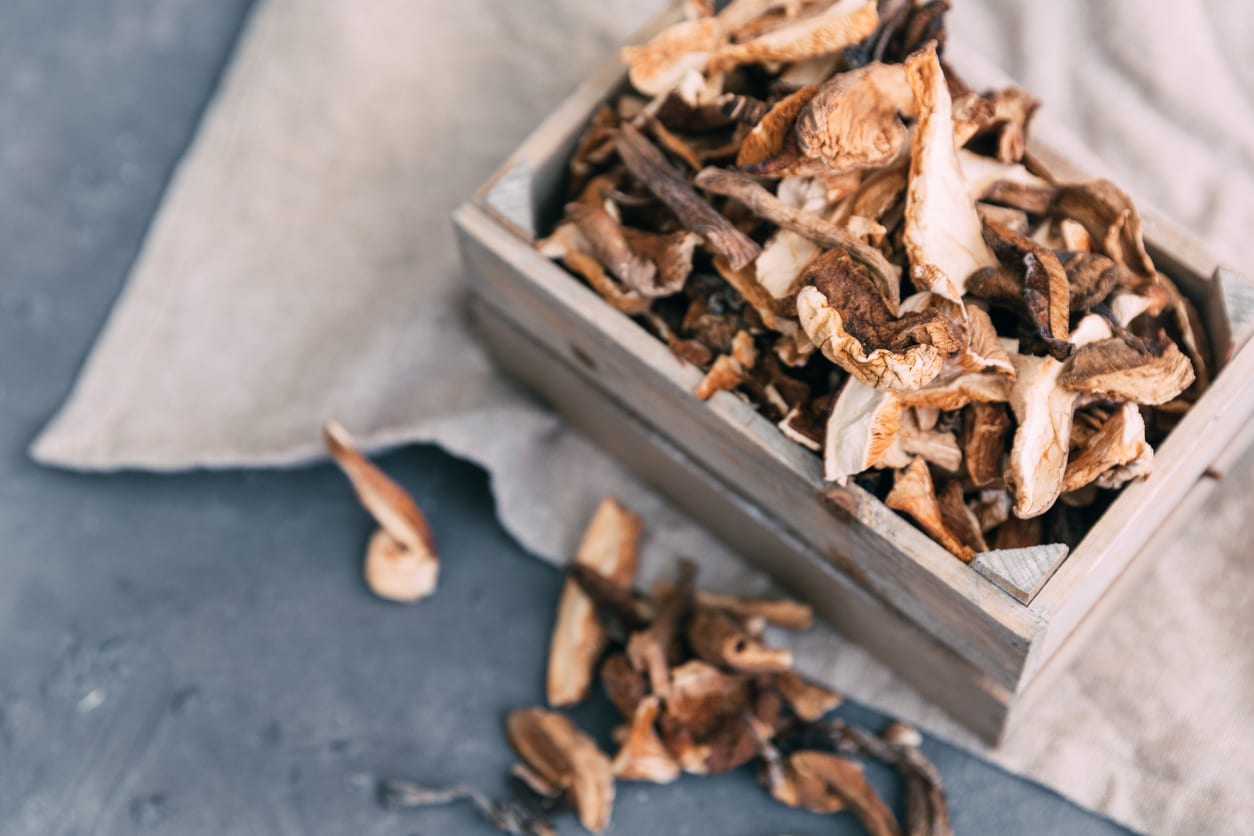 Dried mushrooms on the other hand will last in sealed jars or vacuum packs for some time, but not forever, so check dates on pack.

Store bought fresh mushrooms are grown on layers of straw, manure and well rotted compost. In a wild paddock or forest block they will spring from the ground where animal defecation has been.

It is therefore important to clean any mushrooms before using. Water is vetoed by most cooking authorities, turning the soft downy exterior into slime, but a quick splash before cooking is in fact quite harmless and beneficial hygiene.

Alternately, brush the outer most layer of chitin with dry kitchen towels to remove any dirt particles.

The mushroom is the perennial savoury starter. There is not a lot of sweet volatiles in their flavour profile so they do not crossover to the dessert table.

Instead they partner with meats, cheeses, spices, vegetables and grains and can easily hold up a dish all on their own.

Mushrooms deserve to be cooked slow. Long, dry cooking or ‘sweating’ is preferential enabling the excess moisture to be removed, therefore intensifying the flavour of the natural acids and aromas.

Because of the different cell structure that makes them different to plants, mushrooms won’t break down or turn to mush with long cooking, so they become a natural addition to casseroles, stews, sauces and soups.

Rehydrated dried mushrooms will keep their shape, even when the flavour can be lost to the water they are soaked in. Keep the water from any soaked dry mushroom as it becomes a strong tasting liquor to be added as well.