Firefighters search for survivors among the debris of collapsed buildings after a landslide hit an industrial park in Shenzhen, Guangdong province, China. REUTERS/Tyrone Siu

Dozens of people are missing after a massive landslide engulfed 22 buildings in one of China’s major industrial centres.

Witnesses described a mass of red earth and mud racing towards the park in the southern industrial city of Shenzhen, on Sunday, burying or crushing factories and workers’ dormitories.

About 900 people were evacuated, and four were pulled from rubble with minor or no injuries. No fatalities have been reported but state media say as many as 59 remain missing – two workers’ dormitories are among the buildings destroyed by the landslide. 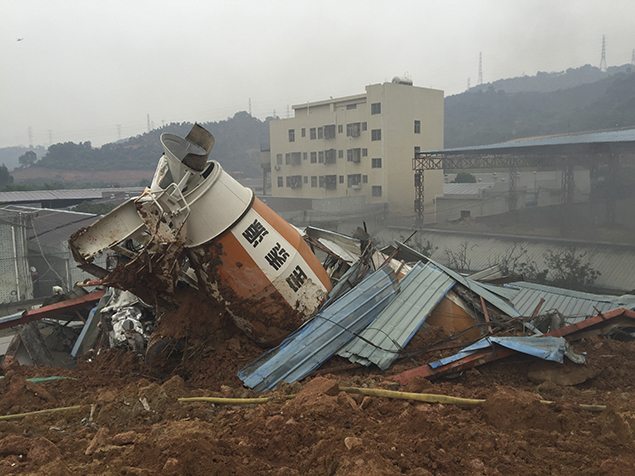 A damaged vehicle is seen among the debris at the site of the landslide. REUTERS

A local worker told the state-run Xinhua news agency that he saw “red earth and mud running towards the company building”.

About 1500 firefighters are at the site assisting in the rescue operation.

The cause of the slide is unclear. Firefighters search for survivors among the debris of collapsed buildings.
REUTERS/Tyrone Siu