For a quick and easy flavour hit you can't go past this flavoursome crowd pleaser.

Using a skewer, pierce each eggplant 5-6 times, spray with oil and cook, turning occasionally, for 15 minutes or until skin blackens and eggplant is softened. Place on one baking tray and bake for a further 15-20 minutes or until soft and slightly collapsed. Allow to cool enough to handle, trim stems, discard skin and roughly chop flesh. Place eggplant, garlic, tahini, lemon juice, olive oil, cumin and salt to season into a food processor, pulse to desired consistency.

To make wafers, divide dough into 8 portions. On a lightly floured bench, roll each portion into long thin pieces, 1-2mm thick. Place on baking trays, brush with extra olive oil, sprinkle with dukkah. Bake for 8-10 minutes or until golden brown and crisp. Cool on wire rack. Wafers can be stored in an airtight container for 1 week.

To serve, break wafers into chunks. Place baba ganoush into a bowl, drizzle with olive oil and sprinkle with extra dukkah. Serve with tomatoes and olives.

Prepare yourself for a heady mix of aromas and...

Prepare yourself for a heady mix of aromas and... more
more 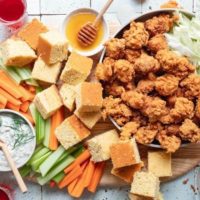