Some art looks and feels so good it just deserves to be worn. Two visionaries are using the evocative material of latex to make powerful fashion statements worn by Beyoncé, as well as make waves at NZ’s World of WearableArt Awards Show.

No longer just the domain of fetish and entertainment wear, latex is emerging as the clothing of choice for those wanting to make a statement.

Dawn Mostow and Ben Gould are leaders in the industry of luxury latex design. Their pieces have been worn by Beyoncé, Katy Perry, Lady Gaga and Kylie Jenner. They have won many awards for their unique style, including the Wearable Technology Award in the World of WearableArt (WOW) Awards in 2017 with their Labyrinth Gown. Meanwhile, their 2018 entry in the awards (Foreign Bodies) won second place in the Under the Microscope Section, the International Design Award: Americas and the Overall International Design Award.

It was a trip to Japan in 2003 that really fine-tuned Mostow’s design aesthetic. She studied visual arts in the US before living in Japan while on the Japan Exchange and Teaching Program until 2006.

“Studying traditional kimono wearing and construction in rural Takayama in the central Japanese Alps, and then heading to Harajuku, Tokyo for fashion and cosplay events, allowed me to translate my experience into a unique aesthetic by combining the classical with the modern.”

Mostow now uses principles of Japanese design, such as colour layout and balance, along with meticulous construction standards, to inform her process. “Even with garment designs not specifically themed in the Japanese tradition, the design principles and attention to detail are applicable.

“Especially inspiring is how Harajuku fashion represents all of style history existing simultaneously: the wearers go about daily activities like dining, shopping, and strolling in a park rather than just reserving that fabulous attire for dark nightclubs.”

Mostow first began experimenting with latex because she couldn’t find anything colourful enough to wear. So much of the latex clothing she had seen in New York was black and sinister and she preferred bright and edgy.

She started working with latex in 2009 as a means of exploring her experience of living in Japan. Her passion quickly grew into a latex fashion business, Dawnamatrix. Dawn works painstakingly on a piece.

“I fell in love!” she admits. “Having designed traditional fabric clothing since 1997, latex as a medium always intrigued me. It is futuristic, evocative, playful, with visual qualities similar to animation and graphic design. It demands attention and invites questions, while transforming the wearer.”

Her first latex garment was a white-and-red kimono, featuring the imperial flag of Japan, and about 100 colourful hand-cut cherry blossom flowers. When Mostow returned to the US from Japan she did a Master of Fine Arts at the Pratt Institute, where she met Gould, an industrial designer. The couple have worked together as long as they’ve been together.

“Our first real conversation with each other was about a costume contest in Brooklyn,” says Gould.

“Our ideas build on one another until we both have the same vision in our minds. The creative excitement we both felt is a big part of our relationship: we’ve been together now for 13 years.”

The Atlanta-based couple say they love working with latex as it “offers an incredible range of vibrancy, texture, and gloss, enabling us as designers to wrap sharp-edged graphics around organic body forms. Unlike woven materials, latex is entirely uniform, so that even the smallest pieces maintain their strength without the possibility of frayed threads. This allows us to cut the material by hand or with a laser to create minute details, and bond them into appliqué.”

They have multiple suppliers who provide different types of latex sheeting. Some of their materials are single solid colours, some are made with sprays and swirls of colours and others are cast into textured plates. “We pick from a very broad palette to make each piece,” says Mostow.

“Once colours are selected, we construct a paper cutting pattern that is tailored to the body’s measurements and the desired style. Each latex panel is cut to shape, then bonded together using a combination of glue and solvents. There’s a bit of chemistry involved, but the ultimate outcome looks practically seamless.”

They employ many of the same technologies used in the fashion world such as laser cutting, 3D printing and materials such as steel, foams and plastics. Their tool kit includes glue, knives and careful hands. “Learning to work with latex takes a lot of patience and dexterity, as every seam and bond must be hand-applied,” says Gould.

While Dawnamatrix produce basic latex garments, they are best known for their artistic explorations. “Our favorite projects are always something no-one has ever seen before,” says Mostow. “A garment by Dawnamatrix is made to empower its wearer with body-hugging pride and confidence … for some, latex is the only thing that makes them feel totally alive.”

The couple first encountered World of WearableArt at the Museum of Pop Culture in Seattle, where WOW’s International Touring Exhibition was on display. “We researched the entry process as soon as we got home, and submitted two designs that year,” says Gould.

Adds Mostow: “All we really knew of New Zealand before entering WOW was that it was a very long plane ride away and they have kiwi birds, hobbits, and Flight of the Conchords. On our first visit in 2017, we only managed to see one of those things, but fell completely in love with the people, the landscape, and the culture of New Zealand.”

They spent 10 days travelling from Auckland to Wellington. They stayed at The De Preaux Lodge in Matamata, explored the Waitomo glowworm caves, climbed Wairere Falls and saw breathtaking stars each night.

The couple believe that WOW makes an important contribution to contemporary culture. “We live in a postmodern, post-fine art era, where persona is crowned king,” says Mostow. “The personality cult surrounding today’s public figures is more palpable than their good works. WOW challenges today’s global artists to conceive of original personalities that can communicate their content on stage. The audience must decipher the meaning through all the same methods as one would judge a canvas.

“Even more than commercial work, as fine artists, nothing is better than being recognised for our art. Seeing our work appear on stage in such a dramatic format is fantastic.” 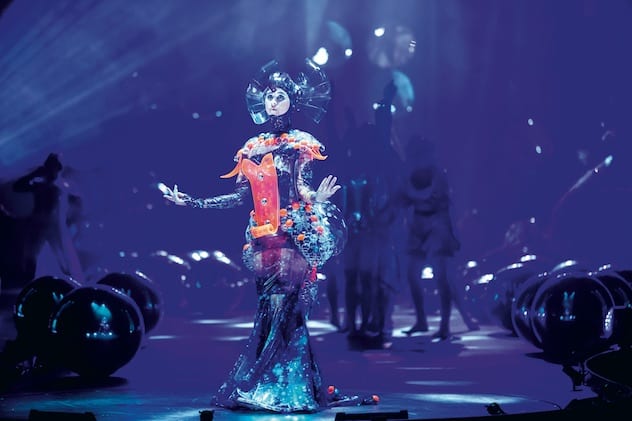 In 2018 their entry, Foreign Bodies, won the International Design Award: Americas and the Overall International Design Award. The idea of ‘blood cells’ was an early part of the creative conversation, as was the inflatable chamber to create these bulbous forms. “These dodecahedrons [12-sided figures] are made to represent the foreign bodies of these otherwise healthy vibrant blood cells,” says Gould. “But it is our intention to make ambiguous whether these invaders are here to help or harm the cell with which they have bonded.”

While not part of their daily wardrobe, the couple love to wear latex. “Whenever we want to be the centre of attention, latex clothing is the way to go,” says Mostow.

Tickets are on sale now for the 2019 WOW Awards Show. Expect the unexpected and see extraordinary works of art come to life on stage. For more information and to book your tickets, visit worldofwearableart.com.

Check out the incredible artwork and winners from the World of WearableArt Awards Show in 2018, here.