‚ÄúEverybody was into grunge fashion when we made this,‚Äù she recalls. ‚ÄúWe were having to look to the future and bring it to the table. We were inventing pretty much everything.‚Äù

More than 25 years after Clueless landed in theatres, May and Heckerling look back on five key pieces of costuming. May:¬ÝAs this was the first outfit, we needed to get it right. She‚Äôd be in the Quad, which was outside, there was going to be a lot of green. We tried blue, we tried red, but they didn‚Äôt have the right energy.

Heckerling:¬ÝWe originally had something else for Cher to wear, but Mona kept telling me she couldn‚Äôt sleep at night. She was worried Dionne‚Äôs outfit would shine, and Cher‚Äôs would disappear into the background.

May: We had Alicia [Silverstone] try on this yellow Dolce & Gabbana suit. It was off the rack. I had to pay for it. In the fitting, everyone just went, ‚ÄòYes‚Äô. We‚Äôd found THE outfit.

Heckerling:¬ÝYou don‚Äôt dress them separately; they were a pair. They had to go together.

May:¬ÝWe wanted Dionne to complement her, so we did the black and white suit. We added the vinyl lapels to match her hat. Amy was such a visionary, to have a girl who was African American in that setting of rich families in Beverly Hills wearing designer clothes. 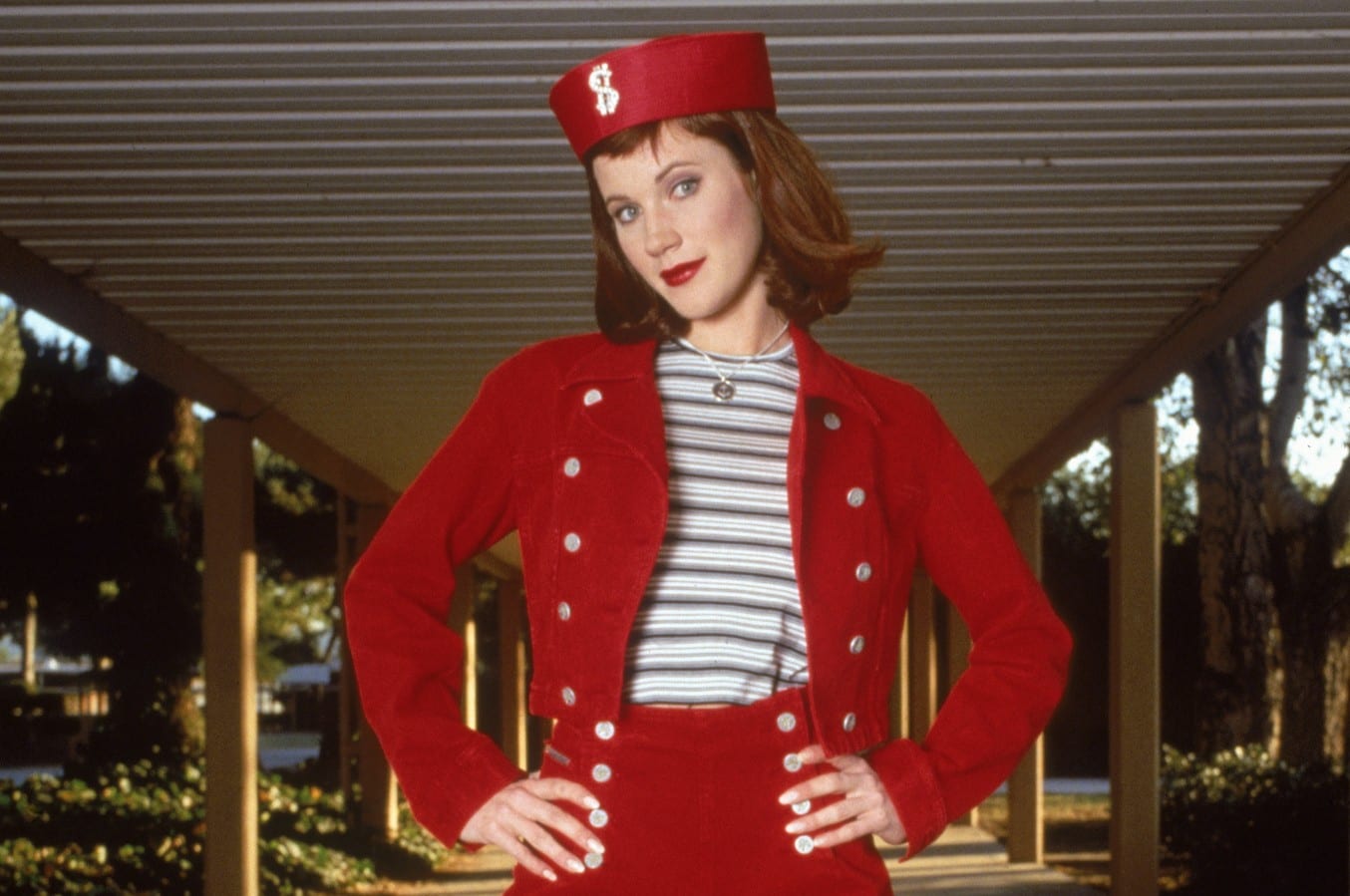 May:¬ÝAmber was a fashion victim and wanted to be Cher so bad. She loved dressing up and themes, so this was her sailor outfit but done in red. A lot of directors don‚Äôt let actors wear hats because you can‚Äôt see their eyes, but Amy was always saying, ‚ÄòWhat kind of hat can we add to this?‚Äô

Heckerling:¬ÝAmber was going to be in the classroom, so it was all about the hat.

May:¬ÝWhen I put the dollar sign on Amber‚Äôs hat, Amy almost cried because it was so perfect. It‚Äôs not often that you get to dress a secondary character in such a dynamic way.

Heckerling:¬ÝThe idea with Amber was to have her going to different kinds of characters with her fashion. She didn‚Äôt just get up in the morning and say, ‚ÄòWhat should I wear?‚Äô For Amber, it was more like, ‚ÄòWho should I be?‚Äô

May:¬ÝAlicia had a beautiful spaghetti-strapped black tank top. The look was new at the time but is still emulated today. Amber wore a striped outfit, like a Mexican wrestler or old bathing suits, and Dionne had a tuxedo shirt. We tried to take things that were high fashion and translated them to the gym.

Heckerling: If I was going to be having these characters wearing different colours to represent seasons, the gym class was going to carry through all of the seasons; I felt it should be consistent, so we went with black and white. It needed to be state of the art fashionable in styles that still reflected each of the characters.

May: All of these styles are very different, but it was my job to make them work. It‚Äôs like putting a puzzle together, but we‚Äôd always start with Cher‚Äôs outfit being at the centre.

May: Cher is in a classic schoolgirl outfit, a little sweater vest, the plaid skirt with knee-highs, a timeless look. She was dressed to look more grown-up, so Mr. Hall saw them as adults, as equals. I loved Wallace Shawn‚Äôs look, the ill-fitting tweed jacket that looked like he‚Äôd had it for 20 years, and his outdated ties. She‚Äôs more together than he is. Then there‚Äôs Dionne with the 1950s clutch, the vinyl skirt, the Boucl√© sweater. It was a beautiful and effective juxtaposition to Cher. It worked together very well as a colour palette. May:¬ÝFor Tai, we needed to see her arc, what happened to her and know how she matured. It was imperative to have a lot of room to grow with her. She came from the East Coast and was very much about what was happening on the street, wearing oversized pants and t-shirts. It was youthful and down-to-earth. It was a great way to introduce her.

Heckerling: Fashion for girls like Tai was a t-shirt where you would show what cartoons or movies or bands you liked, and the rest of it was just layers to keep you warm and hide your body. At the end of the journey, she‚Äôs back to her roots but in an evolved way, wearing different styles of t-shirts with a bit of jewellery, and Tai and Cher agree to be friends because of who they are, not how they looked.

May:¬ÝCher‚Äôs plaid skirts were designer, but Tai‚Äôs were from Contempo Casual. Her style progression reflected her finding herself in her journey of emulating Cher.

Carla Oates ‚Äì aka The Beauty Chef ‚Äì has recently reformulated her cult inner beauty product, Glow. STYLE caught up with her recently to find out all about the reformulation and also talk to Oates about her thoughts on the wellness world.

Oates also shared one of her go-to recipes with the team: her gut-nourishing, skin health-enhancing Glow Blueberry Mousse Pots.

Discover the recipe below and pick up an issue of the new winter issue of STYLE, on now, to read our interview with Oates.¬Ý