Smartphone users outnumber hungry children 20 to 1. The World Food Programme is using an App to help feed them.

A new mobile App developed by the World Food Programme (WFP), a humanitarian agency of the United Nations, is now allowing smartphone users the ability to virtually share a meal with children in impoverished areas across the world.

The WFP’s current focus is to raise funds to feed children in refugee camps fleeing from Syria’s civil war. There are thought to be at least 630,000 refugees registered with the UN in camps in countries neighbouring Syria.

App users can nominate the amount they would like to pay; it can be as little as 50 US cents (70 cents AUD/ 77 cents NZD), which can provide a child with nutrition for a whole day. 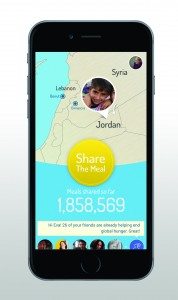 The App is free to download and available globally, it also features the ability to for people to track their donations. Users are able to choose the area they would like to help, meet the children reached by the programme and stay in touch with the impact of their donation.

The World Food Programme boasts 2,419,393 shared meals so far since its global launch on 12 November 2015. It reached more than 1 million meals shared within five weeks of the pilot launch.

The App is available via ShareTheMeal.org