When Cleo Glyde’s father was diagnosed with Parkinson’s disease, he declared that his greatest wish was to travel the world in style. What else was his daughter to do, but volunteer to accompany him?

There is nothing like a cataclysmic event to clear the mind of inessentials. In our family the big change started small, with Dad’s hand tremors – a barely perceptible shift from left to right. “It’s fine. I’m fine,” he gently swatted away when I nervously enquired. Although my dad’s physicality is the first thing you notice – he is a gentle giant of 6 ft 9 – he is essentially a cerebral person, head always in a book about politics, as blissfully disconnected from his body as an Oxford don.

When my brother and I were kids growing up in sun-scorched Adelaide, Dad would quiz us about current affairs at the table. Which country just deposed their leader? What does the Senate do? To this day, at home on Sydney’s South Coast, the radio clicks into life each morning, a town bugle of pronouncements about Brexit and the Middle East. As much a humanist leftie as a boffin, he has always been active in local community politics.

Then it came. A new doctor noticed my father’s gait, which exhibited telltale signs of Parkinson’s disease. Dad was diagnosed with the neurological condition which affects motor control, hence the trembling. A daily fistful of pills managed many of the symptoms, and Dad breezily adapted – he has never been a wallflower. But Parkinson’s is a progressive, degenerative condition that varies wildly, so we didn’t know what lay ahead. Dad even lost his balance one day just walking his cocker spaniel, Celtic and the fall resulted in fluid on the brain, requiring surgery.

There was no sweeping this under the carpet – when the meteor hits Earth, what really matters sharpens into focus. Dad has a meaningful life in retirement: family, friends, a furry best friend, a cause. What did he want to do with the newly precious mobility he had left? His answer came back as decisively as a thunderbolt: travel the world. Dad didn’t just want a 10-day Bali ‘flop and drop’ by the pool. He wanted a world tour, the kind an Agatha Christie duchess undertakes in novels – over months, with an exotic mishmash of destinations. Clearly, my father needed someone by his side.

My brother has school-aged children and my flamboyantly Irish, plain-eating mother’s interest in foreign cuisine begins and ends with curried egg white sandwiches. So my hand shot up. Although my son is yet to be oyster-shucked off the domestic cliff face, he is an adult(ish). When a looming health issue threatens a parent’s way of life, a feeling of helplessness seeps in like ink, leaving you feeling vaguely guilty. The new normal sits in your stomach like a ball of plasticine, impossible to digest. With the medication allaying the symptoms and buying us time, the klieg lights could swivel away from our family’s paralysis in the face of Parkinson’s future onslaught to something giddily positive: world travel. A world trip gave me a tangible way to help Dad by helping him fulfil his bucket list.

Ever since my mother tearfully popped me on an Ansett flight as a seven year old to visit my grandmother solo, festooned in floor-length pink gingham, I was hooked. Like the ululating cry of Tarzan ringing out over the jungle canopy, a flight announcement or ship’s horn is a call to adventure. Count me in!

My father is the world’s most sensible, on-time planner; he has been known to literally print out briefing notes before a family visit to a country tearoom. So he enjoyed the hell out of creating his dream itinerary. There would be Germany, and lots of it. After years in the automotive industry as an executive at Audi and BMW, he had developed a soft spot for the German people’s directness and cultural sophistication.

He wanted to be dazzled by the great cities of Europe. As a country boy from Bellingen, Dad would hitchhike to Kings Cross, the epicentre of neon-splashed 1950s urbanity, to try Australia’s first espresso or spaghetti bolognese, hear live jazz and see foreign films. He never lost that early wonderment at the big, bad city, before getting sucked into the undertow of domestic family responsibility. The lure of the Old World must have lingered, because 60 years later, he wanted to hit the mother lode.

Dad was open to my advice about life on the road however. Making abstract plans whilst looking at a map, you are intuitively drawn to as much action as possible. In real life however, those exciting dashes to yet another city represent more beds, lost mornings packing and more airport security. Once we took to the wishlist itinerary with a scalpel, we were able to extend our nights in each destination to reduce the constant ‘getting there’, and do one thing above all – linger. We settled on an ambitious 13 flights circling the globe westwards. As a nod to the sleeping, coiled power of Parkinson’s, we agreed to factor in afternoon resting time for Dad each day.

Dad and I have so much in common, and he is such a lovely, interesting person, I knew that spending a lot of time in each other’s company would work out and we wouldn’t kill each other by voyage’s end. It was his time to shine. We packed my floaty 30s-style dresses, dad’s Graham Greene-era loose shirts and panama hats, and heavy wool coats for our winter finish, and clicked champagne flutes for our ‘bon voyage’ moment.

Dad got to show me the wonders he wanted to revisit – the oddity of British Tudor architecture dotting undulating, pillowy green tiered tea fields in Malaysia’s Cameron Highlands; the water villages on stilts and planked walkways of Penang Island’s George Town, where hawkers swirled spicy prawns around a wok and laughing Muslim girls in hijabs clustered in for a selfie stick shot. He introduced me to the high-octane thrill of Formula One with pit crew seats at Singapore’s race. Hearing the world champions’ engines snarl, witnessing the supercars careen around the corner at superhuman speed, was electrifying. 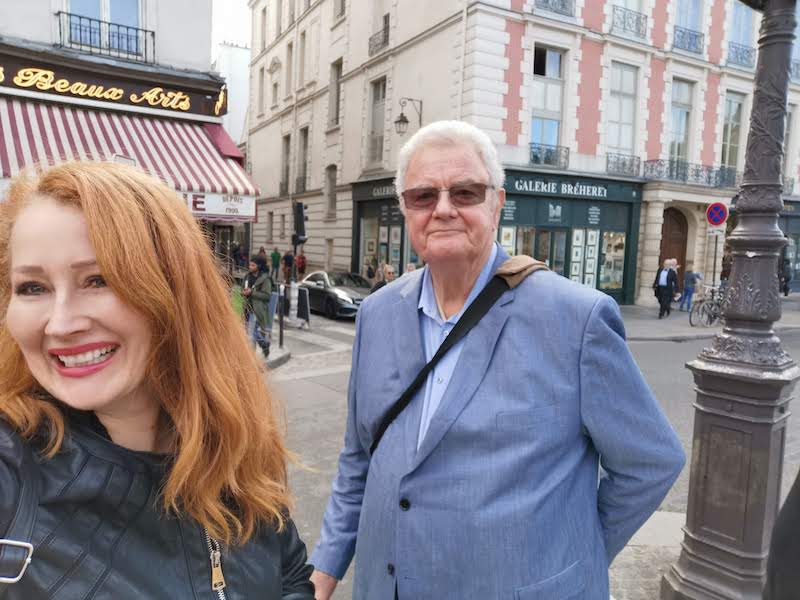 I in turn got to show him my old neighbourhood in Paris. The 2nd arrondissement, once just a postal address on my 1990s letters, came to life as the Rue Montorgueil market, where the scent of plump figs, sugary confections and catchcries of “fraises fraîches!” filled the air. Dad may have been leaning on a cane while strolling along the Promenade Plantée – a magical, elevated garden built on a 19th-century viaduct that winds 5kms from the Bastille to the Bois de Vincennes – but simply being there, enjoying the blooms, peeking into the beehive rooftops and attic apartments of Paris felt like a triumph.

Dad’s unbridled enthusiasm hummed like a happy undercurrent. The Café de Flore, where literary gods Jean-Paul Sartre and his lover, protofeminist Simone de Beauvoir held court for decades, was a pinnacle of cosmopolitan boho fascination for Dad. After decades of serving sinfully buttery croissant to le tout Paris, the décor has never, ever changed. The white-coated waiters were balletic; one pointed out Sartre and De Beauvoir’s favourite table (“They loved eet here, right by the radiator”) as they served one of the best tarte Tatins we will ever taste. “Living in a little pied-à- terre above this café would be the perfect life,” announced Dad, his earnestness making even a snooty Parisian waiter smile.

We shared many great moments – being serenaded under an indigo tropical sky as musicians twirled their double bass and we all sang Under The Boardwalk; seeing a traditional Irish dancer start dancing in a Dingle village pub on Ireland’s dramatically beautiful west coast; eating käsewurst and drinking glühwein in a neighbourhood square in Munich with an old German friend of mine, letting the day’s plans go up in smoke.

As life affirming as it is to visit Penang’s fabled Temple Of A Thousand Buddhas or walk through a sea of orchids, I learned just as much from the challenges of being a caretaker and from Dad himself. Slowing down to 79-year-old time requires a Zen approach to moving through the world. It is effortful to walk twice as slowly, seek out an elevator, move gingerly in and out of every cab. Dad also wanted a record of all the departures boards, signs and meals for his diary, so there was none of my usual dashing. But it’s also liberating to detach from any outcome, recalibrating around someone else’s comfort. My mantra became, “We’ll get there when we get there.”

It was funny to fall back into the childhood dynamic of dad as Boomer moral authority to my ‘You’re-not-the- boss-of-me’ Gen Xer. Dad’s cocked eyebrow was a disapproving signal whenever a message piped, “Please put all technology away” throughout the plane and I was sneaking out one last sentence on Instagram. While most peers, millennials and kids regard a taxi ride or a hotel breakfast as an opportunity to melt away into the virtual world (guilty!), my dad was chatting to strangers instead. With an Aussie lightness of touch, random foreign encounters with every driver, guide and hotel manager were an opportunity to learn about the miraculous experiment that is Singapore or how contemporary Germans feel about living in Hitler’s favourite town.

Cruising along the medieval townships and castles of the Rhine and the mighty Danube, I was the youngest on board by decades. So yes, you find yourself clanging a cowbell on stage with the local oompahpah band as a rotund fellow in lederhosen gives you a lewd wink with every wheeze of his accordion. But each communal experience was given its due with unwavering eye contact, a luxury younger people are starting to unlearn.

Dad’s luck ran out when he had a nasty fall and required elbow surgery. Surprisingly, he agreed with the family consensus that he needed to recuperate at home. Although he had to ditch the US and South Pacific, we managed to slip in one last cheeky visit to London.

“I hope it wasn’t too much for you, Dad, but didn’t we have ourselves a ball,” I said.

“I could have gone another year,” he smiled as he tipped his fedora at a rakish angle and stepped onto the plane.