On the anniversary of the harrowing attack on the twin towers, known around the world as 9/11, we honour those who lost their lives and whose world’s changed forever on that fateful day.

We also honour the brave souls who dedicated themselves to the search and rescue operation, without whom many would not have survived.

Part of that search and rescue team were a select group of highly trained rescue dogs, who were able to identify risk and danger, where humans could not.

One such dog was Bretagne, a member of Texas Task Force 1, an urban search and rescue team that was deployed to the disaster site to search for survivors.

Bretagne’s first deployment, along side owner and trainer Denise Corliss, was at Ground Zero on September 11 2001. The pair entered the harrowing site, and immediately recognised what their role would entail.

Now, Bretagne, as the last known surviving rescue dog from 9/11, has been celebrated like never before. On her 16th birthday (over 100 in human years), the city of New York decided to throw her a surprise ‘super sweet 16’.

The celebration began with a flight to New York for Bretagne and Denise, where they were welcomed with 5-star luxury in New York’s Central Park Hotel. The golden retriever reclined on soft beds, was treated to a gourmet burger and taken to times square where they were honoured with a billboard thanking them for their service – all before the grand finale. 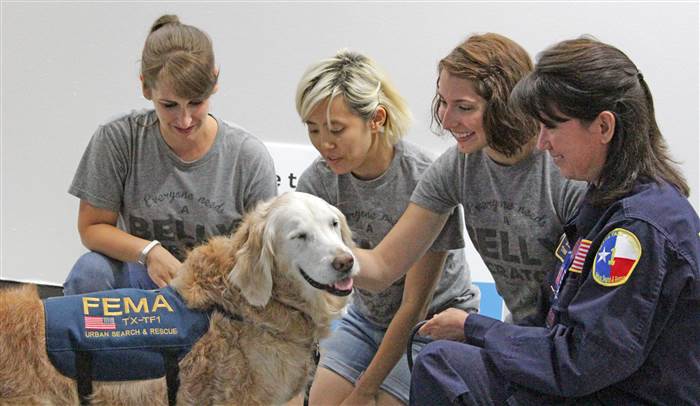 After attending a dog park where she was gifted a silver charm from Tiffany & Co, Bretagne was treated to a surprise birthday party back at the hotel, complete with a dog-friendly birthday cake and a plethora of presents.

Throughout the day, Bretagne and her trainer were thanked by New Yorkers who took the time to remember their service and express their gratitude.

To top of Bretagne’s perfect day, the pair were honoured with a dedication of a cobblestone on the grounds of the 9/11 Memorial and Hotel 1 donated $1000 dollars to Texas Task Force 1, to ensure dogs like Bretagne would continue to be trained so that one day, they too could save a life.

Truly a fitting tribute for such a heroic duo.