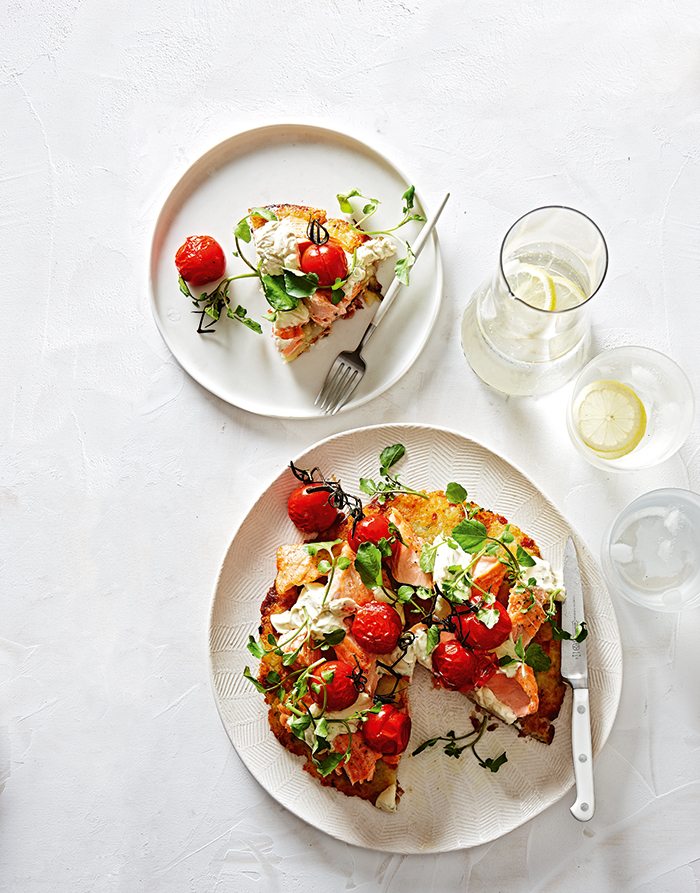 Ocean Trout with Potato Rosti. A light and tasty meal with tarragon horseradish cream for a kick.

Micro herbs or watercress,
to garnish

To make potato rosti, boil potatoes until just tender when pierced with a knife. Do not overcook. Cool to room temperature. Peel. Refrigerate until cold. Roughly grate into a bowl. Add ham, shallots and cheese. Mix well.

Preheat oven to 180˚C. Heat half the duck fat in a 26cm-diameter non-stick frying pan over a medium heat. Spread half the potato mixture over base of pan. Press down lightly. Repeat with remaining potato mixture. Cook for 10 to 15 minutes, reducing temperature if over-colouring, until golden and crisp. Invert carefully onto a large plate.

Meanwhile, season the trout and tomatoes. Place on an oiled baking tray. Drizzle with oil. Cook for 15 minutes or
until cooked to your liking.

To make tarragon horseradish cream, place ingredients in a bowl. Whisk to combine.

To serve, transfer rosti to a serving plate. Break trout into large pieces. Arrange over rosti. Spoon over horseradish cream. Garnish with micro herbs or watercress.