Astronaut Karen Nyberg looks through a window in the Kibo laboratory of the International Space Station in this photo released by NASA.

Here are five ways being in space affects your health and wellbeing.

Today is International Space Day. The first human sent to space was Russian cosmonaut Yuri Gagarin in 1961 and since then hundreds of people have been into space. While some of us would jump at the chance to see our “pale blue dot” from afar, what are the health risks of venturing out there?

With the lack of gravity or at least far less gravity than here on earth, bone density decreases, muscles shrink and cardiac function is reduced, after prolonged exposure. NASA has revealed that the greatest loss of bone minerals occurs in key points in the lower body: hips, lumbar spine, and the femur (or upper leg). Muscles fibres shrink leaving astronauts with weaker muscle strength and impaired coordination.

Without the protection of our atmosphere and magnetosphere humans are vulnerable to the intense radiation of the sun. Space radiation can increase chances of cancer, central nervous system impairment and degenerative diseases.

Evidence suggests that immune function becomes deregulated, even during short space flights. NASA has observed dormant or undiscovered herpes viruses appearing or reappearing in astronauts during missions. The immune system returns to normal function within two weeks of returning to earth.

Astronauts eat less than our ordinary food intake resulting in about a 5% BMI loss (body mass index), so for someone who is 70kg they would return to earth 3.5 kg lighter. This loss however is not through fat loss but usually from minerals and tissues, essential to human health such as bone and muscle.

How space affects the psyche: As there is no regular day/night pattern in space, according to NASA astronauts will sleep on average less than six hours a day. Studies here on earth have shown prolonged sleep reduction contributes to increased anxiety and decrease in cognitive performance, the same rule applies in space.

NASA has stated that interpersonal compatibility has been vital in choosing and adequately training astronauts for missions, combating any adverse effects of space travel on psychological well being. NASA cite team composition and leadership competencies as the main factors for ensuring astronauts are not only working at their optimum, but also psychologically healthy. 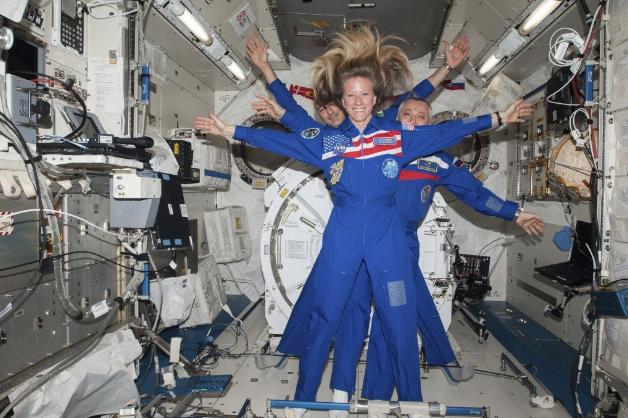 NASA astronaut Nyberg, Russian cosmonaut Yurchikhin and astronaut Parmitano, pose for a photo in the Kibo laboratory of the International Space Station. REUTERS/NASA

5 signs you should see a podiatrist

As long as they do their job and get us from A to B, many...

As long as they do their job and get us from A to B, many... more
more

Meet the couple pioneering permaculture farming in the heart of Thames

In an interview with Monique Hemmingson from her book Wild...

In an interview with Monique Hemmingson from her book Wild... more
more

Here’s Why You Should Switch Off For Wellbeing

Science is telling us to get back to nature for a more...

Science is telling us to get back to nature for a more... more
more

How Volunteering Will Boost Your Mental Health

New research supports the old belief that nature is good...