Tasmania is home to many of Australia's official Great Walks, including The Overland Track. ISTOCK

To enjoy Australia is to enjoy the great outdoors, which is why we've compiled the best five walks the country has to offer, from multi-day hikes to day-trip ambles.

A five-hour walk is all it takes to reach the roof of Australia, Mount Kosciuszko – the country’s highest peak.

At 2,228 metres, the summit can be reached with relative ease on a medium-exertion family day-trip. Australia’s highest summit can be conquered with relative ease. ISTOCK

It’s easy enough to navigate independently, but guided walks are an option for that extra bit of security.

Read more: The top five most-Instagrammed locations in Australia in 2019

Hike-enthused bucket-listers come from far and wide to complete the Overland Track in Tasmania.

The island state is home to five of Australia’s 12 official Great Walks, and it’s easy to see why, with The Overland arguably the flagship of the fleet. 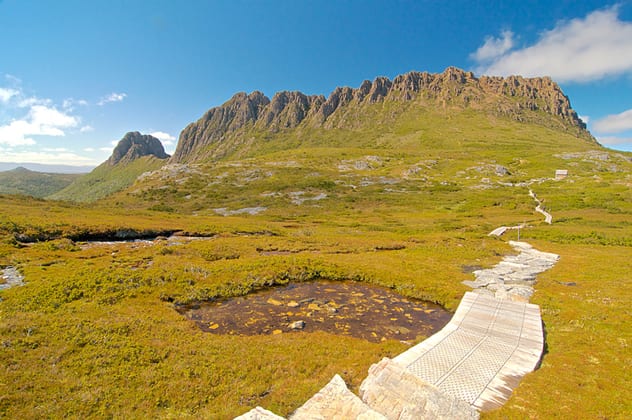 Overland Track walkers are rewarded with views such as this of Cradle Mountain. ISTOCK

The trail itself undulates and meanders over 65 kilometers and takes six days to complete.

You can embark on The Overland independently but you must inform the Parks & Wildlife Service.

Alternatively you can opt for one of the several guided-walk operators available.

If six days and 65 kilometres isn’t your idea of a pleasant walk, it’s still possible to enjoy the wild majesty of The Overland Track in miniature form. Dove Lake: The majesty of the Overland Track without the six-day hike. ISTOCK

Largely flat, this six-kilometre trail guides you around the shores of Dove Lake and takes about two hours – perfect for a family afternoon excursion.

Most of the trek is led through the surrounding bush on boardwalk, and it’s unsurprisingly one of Tasmania’s most popular walks.

Famous for the road that bears the same name, this magnificent coastline can also be conquered on foot.

After opening in 2006, the trail stretches out for a lengthy 104 kilometres west from Apollo Bay – but most walkers pick and choose individual sections. The track will take you through gum and eucalypt forest, sand dunes, beaches and cliff-top tracks.

At some point you’ll arrive at the famed Twelve Apostles, the rocky outcrop stumps that make this stretch of coast world-famous.

For the most eager hiker, The Larapinta Trail offers 223 kilometres of uninterrupted ancient outback exploration – a 14-day endurance feat.

Most visitors, however, choose the six-day classic hike which includes hitching a ride on support vehicles for part of the way.

Being so remote, safety is vital out here in the unforgiving wilderness, so it’s advised to the trek the Larapinta Trail as part of a group.

Our Favourite Australian Road Trips To Explore The Country

The list is out! Here are Australia's favourite road trips...

The list is out! Here are Australia's favourite road trips... more
more

In a new book by environmental academic and conservationist...

In a new book by environmental academic and conservationist... more
more

As Covid-19 lockdown closed boarders around the world, the...

As Covid-19 lockdown closed boarders around the world, the... more
more