It's the Duchess of Sussex's birthday! To celebrate, we look back at our all-time favourite Meghan moments.

Who can forget the very first time Harry and Meghan made a public appearance as a couple? The pair showed the world that they were oh so in love in 2017, when the Prince took Meghan to a tennis match at the Invictus Games in Toronto. A royal to be

Meghan was gearing up to leave her acting days behind when she announced her engagement with Prince Harry. Wearing a ring with diamonds from Princess Diana’s collection, Meghan appeared next to Harry at Kensington Palace as the couple revealed their plans to marry to the world in November, 2017. Meghan became the first-ever fiancé to be invited by the Queen to celebrate Christmas with the Royal Family at Sandringham in 2017. Even though they’ve since shirked royal duties, the day Meghan Markle became the Duchess of Sussex will always be one of our favourite moments. Harry and Meghan’s wedding in May 2018 was the stuff of fairytales. The couple tied the knot at Windsor Castle in a star-studded and multicultural ceremony that was thoroughly modern and memorable. Prince Harry and Meghan Markle kiss as they leave St George’s Chapel at Windsor Castle after their wedding. Saturday May 19, 2018. Neil Hall/Pool via REUTERS

Where Harry and Meghan’s attire for their wedding ceremony was elegant and traditional, the pair turned up the style stakes for their reception with their black tie outfit change. Harry looked dashing in a tuxedo, while Meghan wowed with her Stella McCartney gown. The icing on the cake was them driving off in a retro-style electric Jaguar.

In a special treat for royal fans Down Under, the Duke and Duchess announced they were expecting their first child just hours after they touched down in Sydney at the beginning of a 16-day royal tour through Australia, Fiji, Tonga and New Zealand. A surprise tribute from Beyoncé and Jay-Z

We couldn’t include our favourite Meghan moments without acknowledging the time Beyoncé and Jay-Z surprised just about everyone by accepting a Brit Award in front of a portrait of Meghan. “In honour of Black History Month, we bow down to one of our Melanated Monas,” Beyoncé wrote on Instagram. “Congrats on your pregnancy! We wish you so much joy.”

A glowing mother to be

Meghan was clearly champing at the bit to become a mother, with the Duchess often pictured cradling her growing belly during her pregnancy. The Duchess of Sussex during The Fashion Awards 2018 In Partnership With Swarovski at Royal Albert Hall on December 10, 2018 in London, England. Image Credit: Getty

Meghan gave birth to a healthy baby boy on 6 May 2019. Baby Archie Harrison Mountbatten-Windsor made his first public appearance at Windsor Castle two days after he was born. 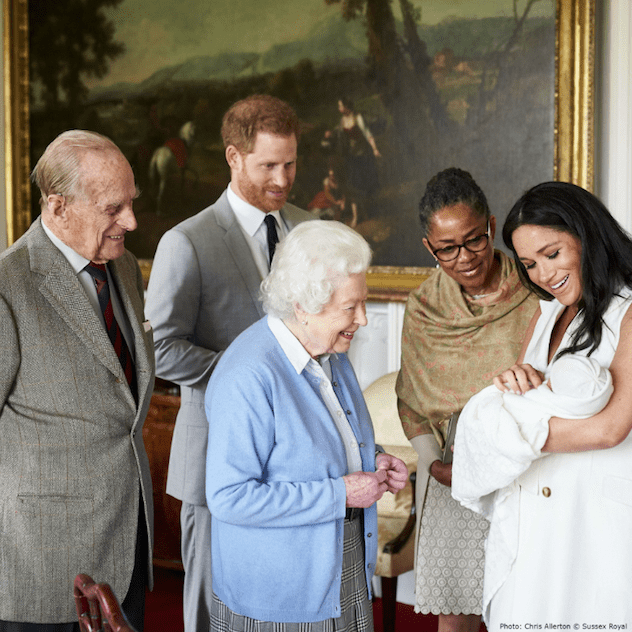 Archie was christened exactly two months after he was born, and the occasion was marked with heartwarming photos of the new parents with their baby boy. Archie at the polo

A few days after his christening, Meghan took Archie to watch Prince Harry and Prince William play in a charity polo match. All smiles at Wimbledon

Rumours of a rift had been swirling for months when Meghan and the Duchess of Cambridge appeared at Wimbledon together. But the royals were photographed smiling, laughing and chatting as they watched Serena Williams take on Simona Halep. Catherine, Duchess of Cambridge, with Meghan, Duchess of Sussex, in the Royal Box after the final between Serena Williams of the U.S. and Romania’s Simona Halep Laurence Griffiths/Pool via REUTERS

The Duchess mixed with Hollywood royalty when she met with Queen Bey at the premiere of The Lion King. And as we’ve since discovered, at this very moment Prince Harry was pitching his wife’s voiceover talents to the CEO of Disney, which led to Meghan narrating documentary Elephants. Baby Archie made a surprise public appearance during his parents’ tour of Africa in September last year, meeting Archbishop Desmond Tutu. Royal watchers were also treated to a touching display of affection between Meghan and her son as she showed off her bouncing baby boy. To mark Archie’s first birthday, the Duke and Duchess released a video of Meghan reading a story to her son. While Meghan may not be comfortable with the spotlight, she certainly appears in her element as a mother.