With expectations high, we joined this cruise from Rome to Fort Lauderdale.

Immediately on boarding Nieuw Statendam, we began to get a feel for Holland America Line’s new vision of cruising. Gone were the dark wood furnishings, old-style atmosphere and Dutch Masters paintings that the line was traditionally known for.

Instead, the light and bright public areas were filled with contemporary furnishings and avant-garde artworks.

While some Holland America traditionalists might initially miss the line’s long-established style, the many Holland America loyalists we met onboard Nieuw Statendam were just loving the new design. 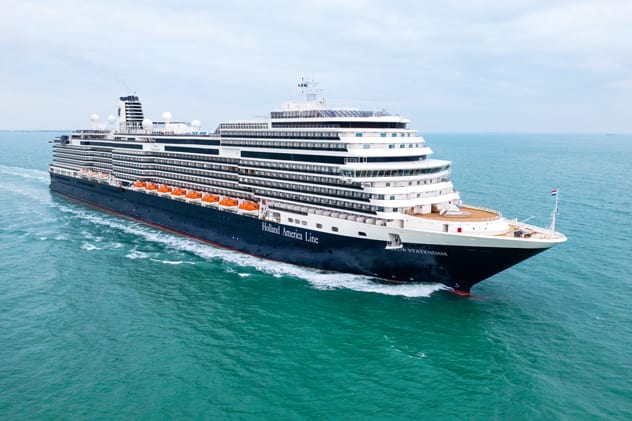 After all, a change is as good as a holiday – and you get to enjoy one of those as well if you give Nieuw Statendam a try.

While Nieuw Statendam is similar to its sister ship – the 2,666-passenger MS Koningsdam, which debuted the line’s contemporary new direction – this second Pinnacle-class ship has several new additions as well. The most highly anticipated of these has been the debut of the Rolling Stone Rock Room – a unique partnership with Rolling Stone magazine, which brings rock classics to the high seas. The Rolling Stone Rock Room has been a hit with passengers right from the start.

“Classic rock appeals to people across generations because the music is universal, and Rolling Stone Rock Room will bring another incredible live music venue to our ships,” he said.

He was proved right on our sailing, with guests of all ages nodding their heads to the music, rocking out in their seats or hitting the dance floor.

The rock band at this new venue was superb. However, despite the superb array of talent onstage, the band had to work hard each night to draw a crowd. With multiple stages throughout the Deck 2 promenade (also known as the Music Walk), guests on Nieuw Statendam cruise the music venues like they’re browsing a buffet.

The Music Walk debuted on Koningsdam, but it has been redesigned and improved on Holland America’s latest ship.

Lincoln Center Stage, which hosts an amazing piano quintet in the early evening, is now separated from Billboard Onboard (an interactive experience with two pianists playing chart-topping hits) and the Rolling Stone Rock Room by soundproof glass doors.

This is especially important when Lincoln Center Stage is transformed into the B.B. King Blues Club, where the B.B. King’s All Stars Band get everyone dancing to high-energy funk, soul, and blues from 9pm until late.

On other nights this stage hosts various guest performers, such as magicians, flautists and an acapella group, while enrichment speakers take over the space to give fascinating lectures on sea days.

It was lucky the entertainment was so good, as our 14-night sailing only had three port stops – all of which were at the beginning of the transatlantic crossing.

Before we’d left home, we’d wondered if we would get bored spending eight days at sea – but any concerns were forgotten once we were on board the ship. It wasn’t long before we settled into a comfortable rhythm – enjoying breakfast in the buffet; followed by reading, relaxing and socialising in Explorations Central on Deck 12, with its sweeping floor-to-ceiling 180-degree ocean views.

Our transatlantic sailing was virtually child-free, but the ship’s contemporary design, re-imagined family oceanview cabins, and the fact it cruises to popular destinations such as Europe and the Caribbean means there will likely be many families on future sailings.

If you would prefer to enjoy this ship without the pitterpatter of little feet, look for itineraries outside the American school holidays.

Suite guests have access to a new dining venue, Club Orange, which has taken over the America’s Test Kitchen space. Club Orange serves the same menu as the main dining room, with additional dishes prepared in an open kitchen.

Access to Club Orange was being trialled at US$50 per person per day for non-suite guests during our cruise. However, few passengers took up the offer, preferring to dine at the ship’s excellent restaurants instead.

These ranged from Tamarind, serving Asian fusion, to Rudi’s Sel de Mer, where quirky ‘Food Faces’ plates decorated each table and set the tone for a dining experience featuring a contemporary twist on French classics.

Dishes included clams au beurre, duck cassoulet, a steaming bowl of hearty bouillabaisse, and a towering Fruits de Mer seafood platter which drew gasps of admiration from those at our table.

Wood-fired pizzas at New York Deli & Pizza were a highlight for lunch, especially as this delicious casual outdoor eatery is included in the cruise cost.

Another lunch tip for sea days is Pinnacle Grill, which serves a US$10 midday menu. It is a clever way to experience this elegant restaurant at a fraction of the regular price.

But for cruisers looking to stick to the complimentary dining options, there are still plenty of choices – such as the elegant main dining room, with its sparkling two-storey wine tower; or the casual Dive In burger bar near the pool.

With the sun shining overhead and a cocktail in hand, a juicy burger with Dive In fries is the perfect lunch to enjoy on a deckchair while you kick back and watch the ocean.

We also discovered one more feature on Nieuw Statendam. On the nights the B.B. King’s All Stars Band took a deserved break, their venue was taken over by The Tiny Little Bigband, a hip swing band from the Netherlands.

Having an additional guest band onboard is something being trialled on Nieuw Statendam, and it was a real hit on our sailing.

The Tiny Little Bigband knew how to swing, and they revelled in the enthusiastic reception they got during their first ever gig at sea.

“It’s great to see so many people out on the floor,” said frontman Franklin Brown, before the band launched into a rendition of Nat King Cole’s ‘Unforgettable’.

This classic was followed by a swing version of ‘She Will Be Loved’ by Maroon 5 – which drew surprised but delighted looks from younger passengers. And in many ways, this encapsulated the vibe on Nieuw Statendam.

Everything old is new again, and better than ever.