Linlithgow, Scotland; March 30th 2018: Statue of Mary Queen of Scots in a park beside Linlithgow Abbey.

There’s something about Mary, Queen of Scots: she’s everywhere in Scotland, from her birthplace at Linlithgow Palace to Craignethan Castle, near Lanark. We explore all the places history fans – and fans of the film – can rediscover this Scottish Queen.

In 2019 a brand new film, Mary Queen of Scots – which stars Saoirse Ronan as the titular Queen, and Margot Robbie as her second cousin and rival monarch Elizabeth I – inspires renewed interest in a tumultuous period of British history and offers the perfect excuse to explore Scotland and the many fascinating historical connections to Mary Stuart, as well as some the stunning filming locations used in the film.

“We wanted to do as much as possible in Scotland and to show Mary in that environment and what her journey with it is. During the film, she comes to a deeper understanding and love of her country, so she had to be outside in it and witness the epic sweep of that landscape. Scotland is an extraordinary country, and it matches the scale of the story and the scale of what happens to Mary at certain points in the film. We just wanted to show Scotland in all of its incredible glory,” says director Josie Rourke of filming in Scotland.

You too can explore the history of Mary, Queen of Scots, including the following places:

These historic ruins, once a royal ‘pleasure palace’, surrounded by peaceful gardens and grounds, were also the birthplace of Mary Stuart.  The site was first occupied as far back as Roman times, 2,000 years ago. There has been a royal residence here since at least the reign of David I (1124–53). He also founded the town that grew up around the royal residence. historicenvironment.scot/visit-a-place/places/linlithgow-palace

Mary spent the first few years of her life, from 27 July 1543, within the safe confines of this castle and in the hands of her guardian Lord Erskine, to February 1548, when she was moved to Dumbarton Castle and eventually shipped to France. It is here, in the Old Chapel, where she was crowned Queen of Scots on 9 September 1543, aged nine months. The ceremony consisted of the quick investiture of the child in the presence of the nobility. stirlingcastle.scot 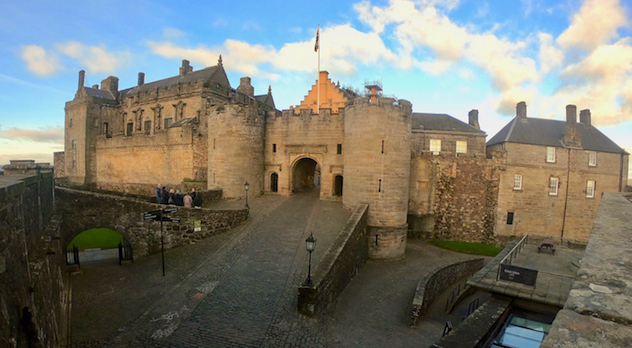 The painting of Mary, Queen of Scots, by an unknown artist, is said to give some clues as to her imprisonment and execution. Famed for her tall and elegant appearance, the captive yet dignified Mary seems to tower above those who look at her in the painting. She stands on a Turkish-style carpet and her pale and slightly weary features are set against a dark background, accentuated by her black velvet dress with its elaborate lace cuffs and a diaphanous cloak. nationalgalleries.org/visit/scottish-national-portrait-gallery

The museum has a vast selection of objects associated with Mary. History fans can explore her dramatic story and separate out the facts from the myths that have built up over the centuries. Included in their selection of items is a harp, or clarsach, made in the 15th century and said to be to have been given by Mary, Queen of Scots to Beatrix Gardyne of Banchory, while on a hunting trip to Atholl, circa 1563. It is also said to have been adorned at one time with a gold portrait of Mary, which could be the real reason for its association with her.

There are various stories of places in Scotland – and elsewhere in the UK – of places the ghost of Mary, Queen of Scots is said to haunt; Craignethan Castle (where Mary is said to have spent the night before the battle of Langside in 1568) has one of those stories. Visitors have reportedly seen a headless woman walking in the grounds, who some believe to be the Scottish Queen. historicenvironment.scot/visit-a-place/places/craignethan-castle

Located in a 16th century tower house in the centre of the historic town, the visitor centre reflects the proud association of the town with Mary who stayed there in 1566. The building was bought in 1927 by the town of Jedburgh as it had always been linked with Mary’s stay on an official tour when she became seriously ill after riding to Hermitage Castle to visit Bothwell, her supposed lover. Each room has a different focus. The Rogues’ Gallery introduces the individuals in the drama of Mary’s life, whilst the Last Letter Room reveals Mary’s final thoughts. scotborders.gov.uk Mary Queen of Scots House is a well-preserved 16th Century fortified building in Jedburgh where Scotland’s most famous monarch stayed in October 1566 towards the end of her reign.

This Pacific paradise has all you need for rest, relaxation...

This Pacific paradise has all you need for rest, relaxation... more
more

A luxury stay in the Sahara Desert in Tunisia’s southwest...

A luxury stay in the Sahara Desert in Tunisia’s southwest... more
more

Are you thinking about travelling to Japan? Here are 7...

Are you thinking about travelling to Japan? Here are 7... more
more