The iconic Piscine Molito pool made famous by Life of Pi reopens this week in the outskirts of Paris. Take a look at the then and now.

Once upon a time in the outskirts of Paris, Piscine Molitor was the place to be. Rumoured to be home to the first ever bikini models, sunbathers and celebrities would stretch out on deck chairs, basking in the French sunshine – and often topless at that.

The stylish art deco pool was probably most famous in modern times as the one referenced in Yann Martel’s best-selling Life of Pi, in which the main character is named after it because his father “wanted his soul to be as clean as the pool’s water”. Tarzan even famously patrolled there as a lifeguard.

“It was an iconic place,” says Frédéric Maynier, president of SOS Piscine Molitor, a local pool preservation group. “You didn’t go there just to swim, you went to be seen. It has always been like that.”

Before long, the pool became derelict – the abandoned, decaying home of graffiti-artists, and even a rave or two.

But yesterday, the 33-metre pool re-opened as part of a luxury 124-room hotel called the MGallery Hotel (part of the French hotel group Accor). The $109 million renovation has been controversial due to the lack of preservation of the pool’s original features.

Extensive work went into restoring its mosaics and stained-glass windows, and in fairness, it has maintained its original blue-yellow colour scheme. Rooms at the new hotel overlook the pool, while others offers views of Paris. (Joyce Attali) 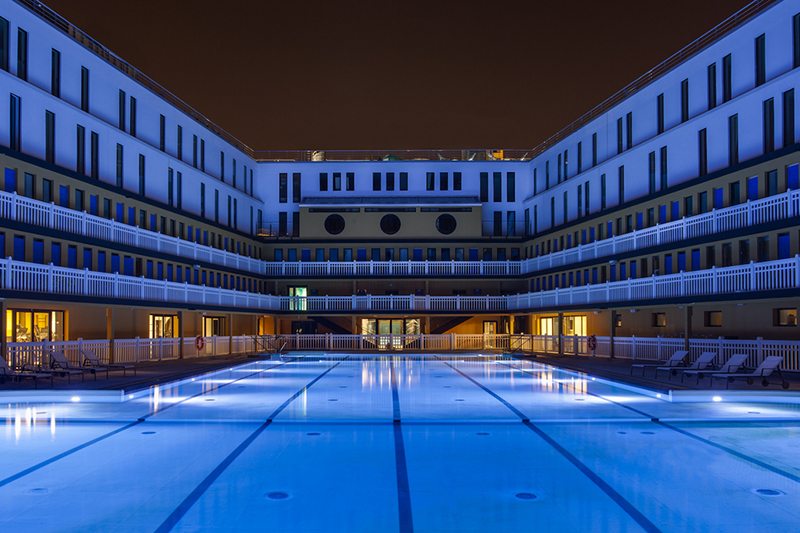 Pre-renovation, it had become a local haunt for the city’s graffiti artists Located in Paris’s 16th arrondissement, the Piscine Molitor re-opened this week, 25 years after it closed Four years before its closure, swimmers enjoy a poolside spot