Sydney’s new bakery on the block, The Cook And Baker, has arrived just in time to share some delectably different Christmas treats with MiNDFOOD.

Recently, the resurgence of bakeries has seen many pastry chefs go from pâtissier to celebrity. From Adriano Zumbo’s macaron-fuelled star power to Spanish pastry maestro Jordi Roca from the Michelin-starred El Celler de Can Roca, the humble baker’s status is steadily on the rise.

So, when Sydney-via-New Zealand chefs Cherie Bevan and Tass Tauroa were deciding on a new food venture, a bakery seemed the ideal choice. After 16 years of successfully working together in some of Sydney’s top restaurants, including stints at the now-closed Bird Cow Fish and Darling Mills, the pair opened The Cook And Baker (thecookandbaker.com.au) in the eastern Sydney suburb of Bondi Junction, offering baked goods and experienced catering services to lovers of fine foods.

“Neither of us is a trained baker; we’re both chefs by trade,” says Bevan (the “Cook”). “But we decided to open a bakery based on growing up and working in New Zealand’s old-school home cookeries.”

After answering an ad in a local New Zealand paper that was calling on chefs for Gusto, a new Bondi cafe, Tauroa (the “Baker”) found himself on a plane bound for Sydney. “I opened Gusto around 18 or 19 years ago, and I struggled to find a good Sydney-based chef at the time,” recalls Bevan. “As soon as Tass and I met, we couldn’t stop talking. We’ve worked on and off together over the past 16 years, and we knew that one day, we would do something like this together. Everyone told us that partnerships don’t work, and I know they don’t always work – I’ve been there myself. But we’re both on the same page, we have the same vision, and luckily, we have the same style, too.”

Tauroa agrees with his business partner: “Everyone who knows us says, ‘My god, it’s about time!’”

Offering a refreshing point of difference to the glut of French and Italian patisseries that dot the city’s streets, The Cook And Baker remains true to Bevan and Tauroa’s home-cookery vision. Inside, you’ll find unique takes on cherished family favourites, such as sticky lemon shortbread, vanilla-custard raspberry-jam doughnuts, and caramel popcorn. “There were so many cafes doing the same thing – everyone seems to carry the same stock – that we wanted to do something very different,” says Tauroa.

A blackboard details their produce-driven business motto, which includes “We love what we do and even more, sharing it with you. From our hands to yours.” It also describes the origin of each of their ingredients; it’s clear that The Cook And Baker is serious about high-end, local, and organic foods. “We use all organic flours and sugars, we have Single Origin organic coffee, beautiful milk from Warrnambool, and biodynamic eggs from Mulloon Creek,” says Bevan. “I believe that if you’ve got good produce and a great chef, then you’ll get a great product. People are so aware these days – more so than ever. You just can’t afford to serve one bad cup of coffee or slice of cake.” It’s an early start in The Cook And Baker’s kitchen, with Tauroa and his team commencing to bake at 4am every morning.

“Normally, patisseries don’t start the day that early,” Tauroa explains. “But because we bake everything from scratch each day, we have to. That’s why we don’t have a refrigerated counter – we don’t keep anything at the end of the day. So if there’s ever leftovers … let’s just say our staff is well fed.”

The freshly baked goods have not gone unnoticed by customers, either. “That’s been the biggest point of feedback so far,” says Bevan. “It’s not often you can get a carrot cake that’s been made fresh that day. Our customers have come to expect that level of quality from us now. Our vision, of course, is to sell out every day, with a queue winding out the shop.”

The food cabinet features a mix of now-signature items, as well as a rotating seasonal menu. During the cooler months, the flourless mandarin-marmalade cake proved popular, and the summer menu will welcome plenty of roasted-stone-fruit galettes and fresh berry tarts. 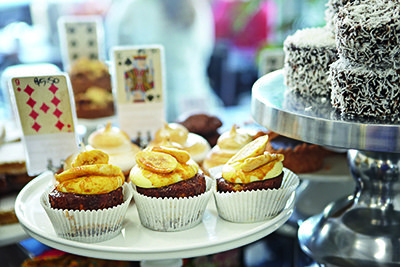 And there’s no shortage of creativity, either; taking inspiration from cookbooks and regular visits to Australian culinary hotspots such as Melbourne, each menu item displays The Cook And Baker’s unconventional style and total respect for the produce. Tauroa attributes this to the duo’s New Zealand upbringing and a lack of formal baking training between the two.

“We have a girl that has been classically trained in baking, and sometimes, I just feel like whacking her spoon and roughing up her icing!” he laughs.

“We don’t want perfectly iced cakes
or the same number of berries on each tart,” adds Bevan. “We’re a lot more rustic and real.”

“Like Grandma made,” jokes Tauroa. “Cherie can be the Grandma!”

For Christmas, the pair is excited to offer a traditional menu – with a few fun and contemporary items, too.

“I’ve been doing Christmas catering for many years, and what I’ve learned is that people are very traditional when it comes to Christmas food,” says Bevan. “We will be making Christmas cakes, summer puddings, and beautiful fruit mince pies. We’ll also be offering a great range of confectionary for gift-giving, as well as gingerbread houses, panforte … the list goes on.”

One thing’s for certain: Whatever the season, you can expect it to be fresh and made with love.

“Neither of us has ever been very money-minded,” says Bevan. “It’s always been about the passion. We’re just very lucky to be the best of friends, too; it makes it all the more special.”

Cat lovers know too well how sensitivity to cat allergens...