Frustrated by public perception of the commercial fishing industry, two fisheries scientists went about telling the real story … by buying a fish and chip shop.

When it comes to running a business, it is crucial to know your product. For fish and chip shop owners Andrew and Renae Tobin, the groundwork has been thorough. In fact, both have doctorates in fisheries science and their specialised insight was the catalyst for making the professional leap.

The Townsville couple opened Tobin Fish Tales in 2015. As well as delicious fish and chips, the takeaway shop serves up easy-to-digest sustainability information, helping to narrow the gap between fishers and consumers.

“We could see a real gap … between what consumers wanted and what information was available to them,” explains Renae. “People wanted local seafood but they weren’t sure where to get it, whether to trust what they were buying and where to get the information about what they should buy. We saw [the shop] as a way to rebuild that connection between the commercial fishing industry and the community.”

Located in the beachside suburb of North Ward, Tobin Fish Tales is committed to serving locally sourced and sustainably caught seafood, as well as sharing the story behind the catch with customers. That information isn’t hard to come by.

For starters, much of the haul is supplied by Andrew, who, after a stint in the shop to help get the business up and running, is back on the water where he feels most at home. “I just love being on the water,” says the self-confessed introvert. “I love fishing. I love fish.”

Andrew’s schedule depends on a few factors, including the season, but at the moment his fishing trips last between five and seven days with a focus on reef fish, particularly coral trout. He works with two others, although the fishing itself is mostly a solo pursuit with help from on-board dory boats.

A portion of their catch is sold to the live fish market – “that’s just simple economics” – and the rest heads off to Tobin Fish Tales, where, according to Andrew, it’s one of the best items on an all-round excellent menu: “Beautiful sweet, delicate flavours; cooked well, it’s hard to beat.”

The Tobins have more than 40 years of combined experience in marine science, but they jumped into the retail game with no history to draw from.

What followed was a “steep learning curve”, according to Renae. The shop’s previous owner provided a one-week handover before leaving his successors to their own devices.

So the Tobins resorted to what they do best. 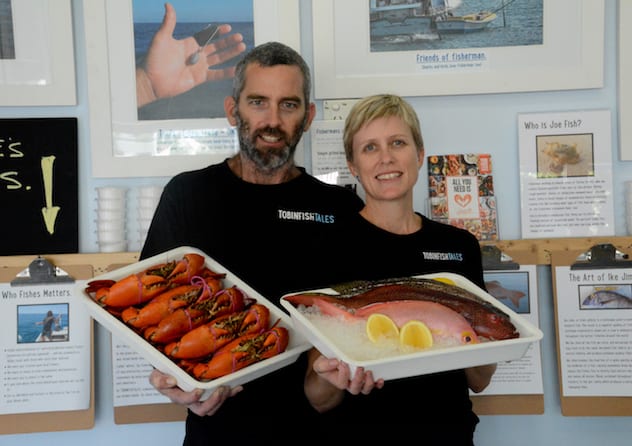 “We’re classic scientists so we experimented a lot,” laughs Renae. “There was a lot of taste testing. When we first went in, we didn’t like the type of oil that was being used so we experimented with different oils and came up with rice grain oil as the best.

“It’s healthier, it doesn’t leave the oily residue on your fish and the fish tastes better.”

The end game is education, but the Tobins understand that the quality of their offering is paramount. Most customers aren’t after a science lesson.

Rather, they are keen on delicious seafood and usually satisfied that their meal selection doubles as an ethical choice.

“A lot of our customers in that first year were scientists, they were very supportive, but our customer base grew from there,” says Renae.

“But there are others that really want to know a lot more about it, particularly at daytimes when you’ve got more time to chat. You have some really great conversations with people about different fisheries and different issues.”

For those up for a chat, there’s no need to wait until Renae or Andrew are around. Three of four senior Tobin staff are science graduates and just as passionate about the shop’s philosophy. Alternatively, information is available throughout the shop.

“If we haven’t caught [the seafood] ourselves, we can tell you who has,” says Renae. “That information is available on the menu board, in the fridge and in the freezer [and] we’ve also got a whole heap of information boards on the back wall to tell you a little bit about fisheries.”

So, do the Tobins believe these efforts, aimed at rebuilding the connection between industry and community, are working?

“We’re pretty hard task-masters,” says Renae. “But I think we are getting there.”

Scientists have unearthed ancient fossils of a four-legged...

Scientists have unearthed ancient fossils of a four-legged... more
more

The Benefits of Sustainable Seafood

Why you should be eating sustainably-sourced...

Why you should be eating sustainably-sourced... more
more