Nutrition: While the pharmaceutical industry searches for the ‘magic bullet’ to boost ageing minds, the ultimate mind food has been flavouring Indian curries...

Cocktails: A delicious cocktail that brings together the loved flatwhite culture in NZ alongside Scapegrace's tasty Vodka. Move aside Espresso Martini's, there's...

Located on the north coast of Japan’s main island, Ishikawa Prefecture is the perfect location to enjoy a luxury holiday while exploring Japan’s traditional Samurai culture, gold leaf craft, onsen towns and high-end ryokans. And it is easy to add it on to a ski vacation. Here’s six not-to-be-missed splendours of Ishikawa.

Kanazawa is known as the gold leaf capital of Japan since it accounts for 99 per cent of Japan’s production of gold leaf crafts. While visiting Kanazawa (where gold leaf is so engrained in the city, that the name translates as ‘marshes of gold’), travellers can try decorating with gold leaf at locations in Kanazawa, including Kanazawa Kinpaku, to create a fascinating souvenir to take home. For a taste of gold, join the queue for an edible gold leaf decorated ice cream at Hakuichi, located in Higashi Chayagai. Kanazawa is the gold leaf capital of Japan

Ishikawa is home to one of the Three Great Gardens in Japan, Kenroku-en Garden, which combines beautiful scenery with artistic designs. Kenroku-en is a 10 hectare landscape garden that is perfect for strolling through the hills, cottages, ponds, and tea houses. Open to the public since 1871, the garden is named Kenroku-en (‘having six factors’) because it has six attributes which exemplify the beauty of the garden including spaciousness, tranquility, artifice, antiquity, water, and magnificent views. In winter months enjoy the glistening frozen lakes among the snow and if visiting Japan in spring, make this a must-do for its cherry blossom covered walkways.

Another famous garden in Ishikawa is the Gyokusen-inmaru Garden which is adjacent to the outer citadel court of Kanazawa Castle. Once the private inner garden of the feudal lord’s family, Gyokusen-inmaru Garden is open year-round and features a large glistening pond, wooden and stone bridges, garden rocks, Japanese pines, cherry trees, and maple trees. Be sure to check out the distinctive Shikishi Tanzaku-Zumi Stone Wall which was the first of its kind to use creatively patterned stone walls with a waterfall structure at the top. Kenrokuen Garden is one of three great gardens of Ishikawa

Ryokan are Japanese style inns which give visitors the chance to experience traditional Japanese lifestyle and hospitality, with tatami floors, futon beds, Japanese style bathrooms, and local cuisine. More than 140 years old and the most famous ryokan in Kanazawa, Asadaya offers Michelin star cuisine, five guest rooms, and staff going above and beyond for their exclusive visitors with personal touches. For example, if you are interested in the serving bowls used in Asadaya’s restaurant, they can take you to the creator’s workshop or home. If you are a chef you can do a workshop in their kitchen; they can take you to a kimono designer’s studio; or their gardener can personally guide you through magical Kenroku-en Gardens.

Inspired by its scenic location, set on the waters of Kujuku bay, guests can enjoy the ultimate refreshing and relaxing ryokan stay at Hyakurakuso ryokan. A focus on water transcends experiences throughout, including the opportunity to fish in the property’s exclusive pond and cook your catch as part of a coastal Japanese degustation. Guests can enjoy three spa baths throughout the property, including a cave spa with Noto deep-sea water pumped from 320 metres below ground. An open-view bath allows guests to bathe with a panoramic outlook of the bay, whilst a private bath can be booked for those who seek solace or romantic soaks. Four restaurants also offer a range of views and locally inspired dishes, with crabs and yellowtails in season each winter and highly recommended. Located by the Sea of Japan, Ishikawa is well-known for its fresh seafood, and some of the best is sold at Omi-cho Market. Since its opening in 1721, the market has been heralded as Kanazawa’s Kitchen with around 200 shops and stalls selling seafood, vegetables, fruit, clothing, and flowers. Visitors should stop off at the market’s Kaisen-don restaurants for the local specialty of seafood served with rice, or at Yaki-Yaki Corner where grilled seafood and meats are served on a stick. If you want to try sake, head to Higashiyama Shuraku which is a traditional brewery with over 120 different famous sake brands, 80 of which can be sampled in the tasting area. The culture of the old samurai districts remains in Ishikawa towns thanks to the efforts of the Kaga Domain to retain the 17th to 19th century culture, and the fact that Ishikawa has been largely untouched by war and natural disasters. More than 20,000 samurai warriors resided in Kanazawa and sought command from the Maeda Clan who ruled Kaga from Kanazawa Castle. Today, the castle is one of the city’s iconic structures and a physical reminder of the Maeda Clan’s rule, open for visitors to stroll the castle grounds, which is decorated with cherry blossom in spring. Kanazawa castle was home for the Maeda clan who ruled 20,000 samurai 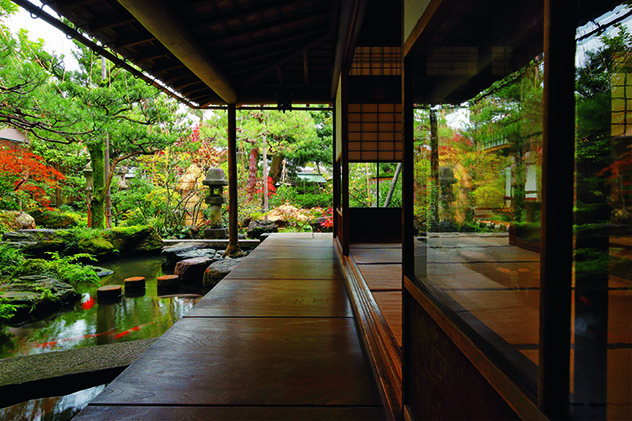 Culture seekers can also experience an authentic Zen tradition steeped in over 700 years of history at the Sōtō-sect Buddhist Sojiji Soin Temple. Explore historic buildings within the temple walls and attend a guided Zen Meditation with an English-speaking German monk in training. You can even stay overnight and experience the simple lifestyle of Buddhist monks by sleeping in traditional Japanese-style rooms with futon beds and vegetarian meals. The temple can be reached by public transport via a 20-minute bus ride from Anamizu Station on the Nanao line of the Noto Railway or a two-hour Express Bus from Kanazawa. The perfect way to end a ski trip in Japan is to stay at one of Ishikawa’s renowned luxury onsen resorts. Located south of Kanazawa, Kaga Onsen is a collection of four traditional hot spring villages including the quaint Yamanaka Onsen resort which is located along the Kakusenkei Gorge. The village’s hot springs were discovered more than 1,300 years ago by a monk and are known for producing some of the best waters in the region. Bathing in the hot springs is an incredible experience, especially in winter as you can watch the snow fall while soaking in the open-air onsen. Yamanaka Onsen resort is located along the Kakusenkei Gorge

How to get to Ishikawa

Daily flights are available from Australia to Tokyo, from which Ishikawa can be reached with a 2-hour 30-minute bullet train ride into the Prefectural capital of Kanazawa or a domestic flight to the regional Komatsu Airport. Ishikawa is a fascinating region of Japan, and is an easy add on to a Honshu ski trip. Travelling via Kanazara is an alternative to the Golden Route. You can find out more here.