Fashion might not seem like the obvious solution to the global mental health crisis, but it’s not letting Steve Dunstan and his team at Kiwi streetwear brand Huffer stop them.

Dunstan describes People Presence as ” Huffer’s code to talk about the hard stuff.” It’s an evolving platform, and Dunstan says they don’t want to dictate what it is or might become.

In fact, he’s wants to make it very clear that he’s no mental health expert; he’s also adamant that he wants People Presence to become a platform for others to open up and about their own mental health experiences. That’s part of the reason that this year, as well as the capsule collection, Huffer turned to the talents of some of the country’s brightest hip hop starsâ€“ Illbaz, Diggy Dupe, Spycc (Swidt) and Bailey Wiley â€“ to bring People Presence to life through their own words and interpretation.

Music was a bit of a no brainer explains Dunstan. “Whatâ€™s something that gets under your skin? We have some amazing friendships in the industry so we rallied up the troops and weâ€™ve got New Zealandâ€™s best to make a song,” he says. “Theyâ€™re all so passionate. It really meant something to them. It was a beautiful experience.”

Transparency is the central theme of this year’s partnership with the Mental Health Foundation. There are the t-shirts emblazoned with ‘See through, work through, break through’ and then there are the transparent jackets in the capsule collection â€“ both which tie into the key message of transparency.

“It’s about not holding things in,” says Dunstan. “And then working through it and breaking through it. If you’re not transparent, no one can help he says.” And while he admits opening up about mental health is often the difficult step he believes that transparency lets people see in and help. “Be okay with talking about it,” he says. “Youâ€™ve got to look after yourself and back yourself so you can reach out. Because there are people there that will help. Sometimes you can get self-absorbed and you lose perception, but there is support out there if you ask.” 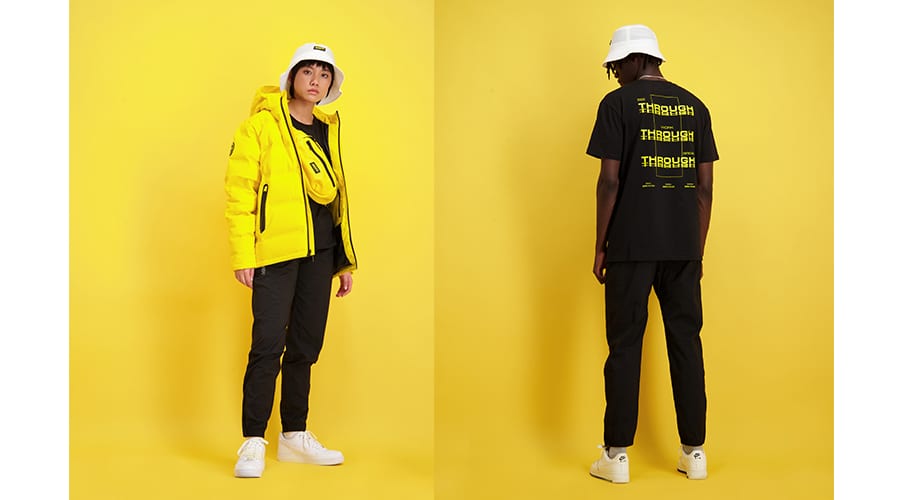 As for the naysayers that might question what good can fashion do for mental health, Dunstan is staunch about the fact that it is people that are at the heart of Huffer.”Fashion and clothing thatâ€™s our trade; thatâ€™s how we employ over 150 people. Weâ€™ve very passionate about building a product with purpose and building communities,” says Dunstan. “People are so important to our brand. People make our brand.”

He’s also aware that too often fashion is about image and who’s wearing what â€“ something that, especially in the Instagram age, can contribute to poor self-esteem. “We’re authentic with the product we make, but people get caught up in image and brands are a part of that.” He hopes that People Presence will inspire meaningful conversations around mental health. “We’re trying to neutralise the negative impact of fashion and let everyone know people are individuals, everyone is cool,” he says.

Dunstan recalls an anecdote involving one of the t-shirts from last year’s capsule collection. “Phone numbers on t-shirts are a bit of a trend,” he says. “And last year’s T-shirt had the phone numbers of the likes of Youthline and Lifeline on it.” He says he was grabbing in coffee and the noticed the barista wearing the t-shirt; someone in front of him asked what the phone numbers were. “He commented on the shirt and then they had a conversation about it. It was pretty cool. He like the shirt, brought it and some money went to the Mental Health Foundation and then he’s out there talking about.”

Besides, fashion has and always will be a great conversation starter, so why can’t the conversations fashion sparks be about mental health?

The Huffer People Presence capsule collection is out now.

How to Wear Pink This Summer

Here’s everything you need to know about how to wear pink this season.

In fashion trends tend to come and go quicker than the weather changes. And while the colour pink underwent a huge revival a few seasons ago now, much to our delight, the uplifting shade isn’t going anywhere any time soon.

At the recent New York, London, Milan and Paris Fashion Weeks, the streets were awash with all shades of pink. From dusky delicate, rose hues to show-stopping electric pinks, the fun and joyful shade is definitely one of the colours to be seen in this season. Here are our favourites tips on how to wear pink right now.

WEAR IT FROM HEAD TO TOE

If you’re wanting to turn heads and stop traffic with your spring wardrobe, nothing gets the job done quite like a head-to-toe pink outfit. While pink is undoubtedly a pretty colour, gone are the days where wearing pink had to equate to an ultra-feminine look. However, if you’re still wary of the colour’s former reputation as a girly shade there are easy ways to dress pink down and give it a modern edge.

Try pairing bright pops of pink with a touch of denim or leather; team your all-pink ensemble with a pair of chunky combat boots or Dad sneakers; or try investing in menswear-inspired silhouettes in various shades of pink.

Accessories are the finishing touch on any look and adding a statement handbag and jewellery is another way to give your head-to-toe pink ensemble a point of difference. CLASH PINK WITH OTHER COLOURS

Wearing pink and red together has long been considered one of the biggest faux pas you can make where fashion is concerned. But thanks to the world of high fashion and street style, this old fashion rule has well and truly been forgotten. You can take a look at our favourite ways to wear pink and red together right here.

But when it comes to clashing vibrant shades with your favourite pink pieces, don’t limit yourself to pairing pink and red together. You’ll be sure to create a statement if you pair  right and cheery shades of pink with green. Not convinced? Here is some inspiration to work green into your wardrobe with pink.

Take a look at more of our favourite street style looks that will show you how to wear to pink right now. These enchanting new fragrances are perfect for the sun-dappled months ahead...

How to Wear Purple This Season

Don't be fooled â€“ this vibrant shade isn't as difficult to wear as you might think...