Escape both body and mind through the restorative practice of yoga at one of these stunning destinations.

Yoga is one of New Zealand’s most popular forms of movement or exercise, with more figures showing its practice has grown by as many yoga providers as gyms around the country. This according to Exercise NZ chief executive Richard Beddie, who says, “it has got so big as a form of activity that we are staging the inaugural yoga conference in Auckland in November. Yoga has doubled in the last five years and just keeps growing largely due to its versatility.

“Yoga is valuable as an activity, as well as being extremely complimentary to lots of other exercise activities. It is very common now for a regular gym user to add in yoga as a part of balance,” says Beddie.

Its popularity has also seen a yoga retreat tourism industry emerge with many global destinations promoting the exercise and meditation form as part of holiday packages.

So, sit back, relax and let MiNDFOOD help you plan your next getaway to one of these yoga hotspots.

Nosara is not only Costa Rica’s top spot for yoga, but it can be considered Central America’s leading yoga hot spot too. With its Pacific jungle landscape, it is a great place to escape, relax and free your mind. It’s not surprising that lots of yoga retreats and yoga teacher training courses are based here. Located in the Gulf of Thailand in the southeast of the country, Koh Phangan has become one of the most popular travel destinations in general, either for yoga lovers, backpackers or general tourists.

There is plenty of calm places where you can immerse yourself in a tranquil sense, surrounded by a spectacular hilly, tropical landscape. The white-sand beaches are great to get into your best lotus position, and the many temples scattered across the region excellent places for reflection, even if you’re not religious.

The forests of central Sri Lanka are home to one of the world’s best yoga retreats, where the scenery and ancient sites on the doorstep are as blissful as the classes. Ulpotha has come to be known as an eco-friendly, vegetarian Yoga retreat that offers Ayurveda, the ancient healing practice that promotes and nourishes a better mind-body connection. 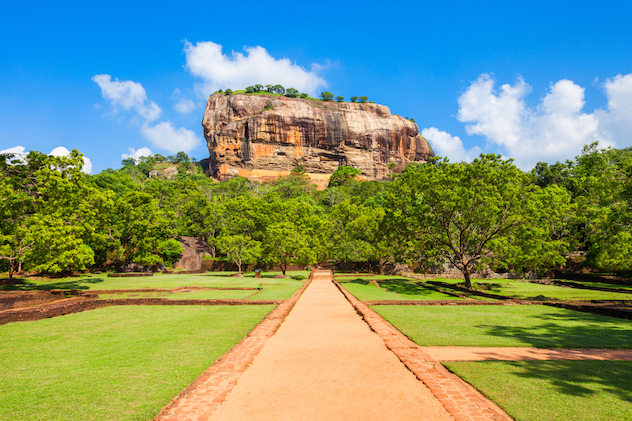 Sigiriya Rock or Lion Rock is an ancient fortress near Dambulla, Sri Lanka. Sigiriya is a UNESCO World Heritage Site.

Looking for bathroom design ideas? Get inspired with these...

Looking for bathroom design ideas? Get inspired with these... more
more