Your Eyebrows Could be the key to Looking Younger

Want to know the secret to eternal youth?  According to scientists, your eyebrows could be the key to looking younger.

Put down that youth-restoring serum that promises to rewind the clock: finessing your eyebrows could be the key to looking younger.

A recent study published in Frontiers in Psychology (you can view it here) found that facial features, such as lips and eyebrows, stand out less as we get older. As part of the study, researchers analysed 763 photos of make-up free women aged between 20 and 80 with various skin tones. A computer programme then analysed facial contrast â€“ how much eyes, lips and eyebrows stand out due to differences in light and darkness with the surrounding skin. It turns out, people with stronger facial contrast are perceived as younger.

Researchers then created Photoshopped versions of some of the images using different levels of contrasts.  The new images were shown to a group of volunteers who were asked to identify the younger-looking face. According to the group, the high-contrast face was chosen as the younger of the two nearly 80 per cent of the time.

The researchers believe that using cosmetics to darken and enhance features would replicate the same results. Co-author Richard Russell, associate professor of psychology at Gettysburg College, told Time â€śThe way we manipulated features in the photos was very similar to what youâ€™d do with makeup, and I would be surprised if you couldnâ€™t get similar effects,â€ť says. â€śWe know that lips get less red with age and eyebrows get lighter, for instance, and those are both things that you could address with makeup if you wanted.â€ť

All the more reason to start perfecting your brow game, we say. Take a look at three of our faves for doing just that in the gallery below. Splurge one this on if you’re serious about turning sparse brows into a full-bodied yet natural-looking statement.

With powder, brown pencil and brush, this nifty 3-in-1 number is all you need to create out-there arches. This felt-tip-like formula is fool-proof. Use one layer for soft yet structured brows or build up colour for bold brows.

Not sure how to shape your eyebrows? Click here for our top beauty tips for bold and beautiful brows.

How to Shape Your Eyebrows

Stop making these common mistakes when it comes to shaping your eyebrows...

Photography by George Gottlieb Kiwi actor Kim Crossman has had a busy career in both the New Zealand and international showbiz scene....

Gucci Has Opened its First High Jewellery Boutique in Paris

If you’re Paris bound, then you’ll want to make sure a visit to Place VendĂ´me is on your list of things to do as Gucci has opened its very first boutique dedicated to fine and high jewellery. The boutique brings to life creative director Alessandro Michele’s passion for jewellery and the first-ever high jewellery collection for Gucci, Hortus Deliciarum, which Michele designed and sourced unique stones for, will be sold at the boutique alongside Gucci’s collection of fine jewellery. The breathtaking Hortus Deliciarum collection draws on the motifs that are dear to Michele and features more than 200 pieces â€“ most of which are one-of-a-kind. The motifs revolve around a trio of themes â€“ the emblems of eternal love; the majesty of the animal kingdom; and singular solitaries redefined with maximalist allure. Each gemstone is uniquely set in what Michele describes as â€śdiscordant symmetryâ€ť, ever-so-slightly mismatched to channel the spirituality of imperfection.

As for the boutique, the design of 16 Place VendĂ´me is a departure from Gucci’s distinct saturated hues we have become accustomed to. The design, in contrast, is elegant and understated allowing the colourful vibrancy of the jewellery housed within to bring the space to life.  In Hortus Deliciarum, coloured gemstones evoke a mythical garden in full bloom, a spectrum of honey-hued imperial topaz, blushed-rosĂ© topaz, velvety green tourmaline, and mandarin garnets, white diamonds, pink and blue sapphires, pearlescent opals, and yellow beryls. 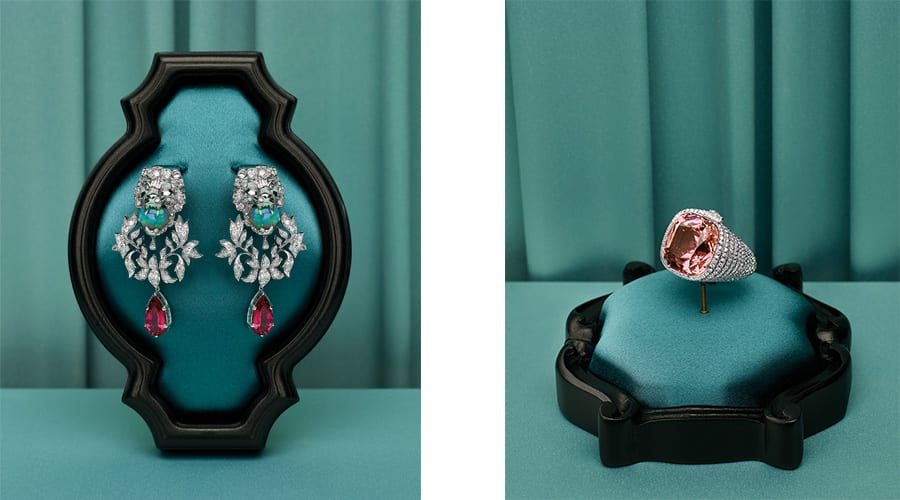