Less than two weeks after two orphaned rhinos were killed in South Africa, poachers have struck again, this time in France. Poachers broke into a French zoo, shot dead a rare white rhinoceros and sawed off its horn in what is believed to be the first time in Europe that a rhino in captivity has been attacked and killed.

The four-year-old male white rhino called Vince was found dead in his enclosure by his keeper at the Thoiry zoo and wildlife park about 50 km (30 miles) west of Paris on Tuesday morning after an overnight break-in, the zoo said.

Police, who were investigating the crime, said the rhino had been shot three times in the head and one of its horns had been sawn off, probably with a chainsaw.

Global trade in rhino horn is banned by a U.N. convention and its sale is illegal in France.

But demand for the horn is strong in newly-affluent Asian countries such as Vietnam, where it is prized as an ingredient in traditional medicines, and African authorities have struggled to counter rampant poaching.

The poachers broke through a gate at the wildlife park during the night and forced the metal door of the enclosure where the rhino lived, the zoo said. 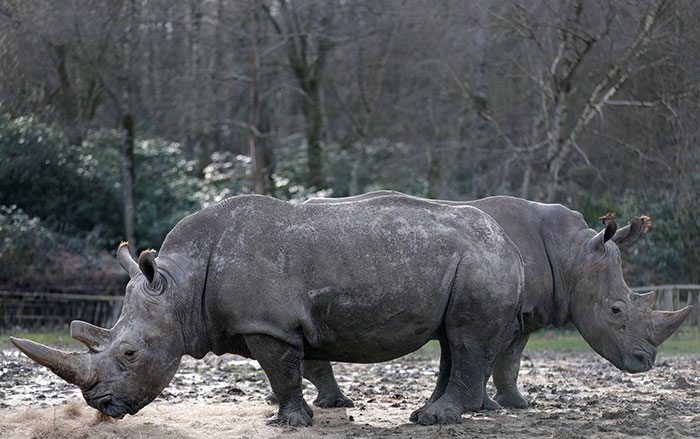 White rhinoceros Bruno and Gracie were unharmed in the attack

The two other rhinos living at the park, 37-year-old Gracie and five-year-old Bruno, were unharmed. Vince’s second horn was partially cut, leading the zoo to believe that the intruders were disturbed or their equipment failed.

The zoo had security measures in place, including surveillance cameras, and five members of staff live on site.

Vince was brought to Thoiry in March 2015 after being born in a zoo in the Netherlands in 2012.

The world population of southern white rhino, once on the brink of extinction, has recovered to around 20,000 thanks to intensive conservation efforts, according to conservation group Save the Rhino.

Rhino poaching rates in South Africa, home to more than 80 per cent of the world’s rhino population, surged from 83 in 2008 to a record 1,215 in 2014, but have fallen for the last two years, according to South African government data.