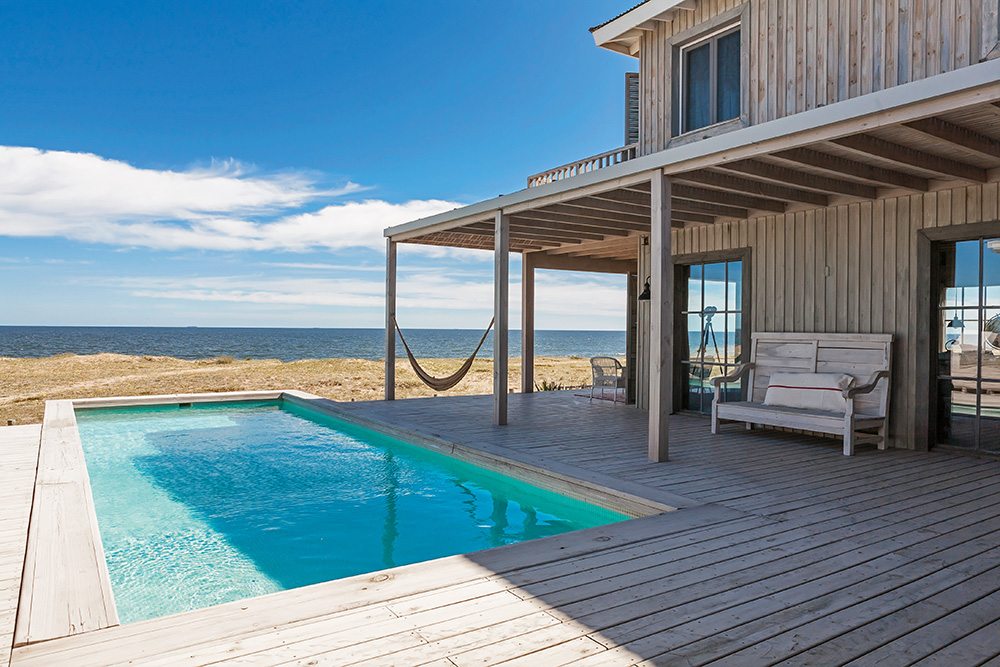 Beside the sandy beach in Punta del Este in ‚Äúthe Hamptons of South America‚Äù, this ‚Ä®house, made of sun-bleached wood, metal and stone, sits quietly on the landscape looking out to the Atlantic. Cool in summer, cosy in winter, it is a haven of rustic simplicity.¬Ý

For interior designer Pablo Chiappori, creating a beach ‚Ä®house was an opportunity to cement his personal style. Having opened the Paul French Gallery in Buenos Aires several years earlier, Chiappori was keen to oversee an entire building project, and the idea of a wooden house facing the Atlantic Ocean was a challenge.

‚ÄúFor me, this new project is one way to show what is my style, and what the story is ‚Ä®I want to tell,‚Äù explains Chiappori. A section ‚Ä®of virgin beachfront in Uruguay‚Äôs Punta del Este ‚Äì also known as ‚Äúthe Hamptons of South America‚Äù ‚Äì is a rare find nowadays, and the unspoilt location set the tone for the house.

Wood was a natural choice for construction as it harmonises well with the landscape, and the material is carried through to the interior, blurring the lines between indoors and out.

The property‚Äôs layout is simple, consisting of two modules separated by the pool. The main module is a self-contained house comprising the living room, kitchen, a playroom, a bathroom and two bedrooms.

Upstairs, the master bedroom shares the first floor with another bathroom, dressing room and a small workplace with an ocean view. Across an internal courtyard, the second module is for guests, with two bedrooms and ‚Ä®a bathroom. All the furniture and objects that decorate the house are sourced from Paul French Gallery, with a palette restricted to whites, stone, wood tones and gunmetal grey.

‚ÄúThe house is the result of putting wood and stone together ‚Äì this mix represents the simple style of Punta del Este,‚Äù says Chiappori. ‚ÄúThe wood is stained, and peeling paint recreates the effect that nature prints upon objects over the years.‚Äù

The overall effect is one of rustic simplicity, with metal lamps and furniture lending a slight industrial edge. The sea is only metres away, and the property is used throughout the year ‚Äì sometimes for a month at a time ‚Äì so the design accommodates each season, with semi-covered decks providing shade during summer and heating throughout to compensate for wintry Atlantic winds.

It‚Äôs an approach that works ‚Äì perhaps ‚Ä®too well, according to Chiappori, ‚ÄúThe only problem of the house is when you are inside, you do not want to leave.‚Äù

Take a tour of this incredible house by clicking on the photos below. Crisp white furnishings lend ‚Ä®an air of romantic whimsy in the upstairs bedroom and bathroom, while distressed floorboards look as though they have ‚Ä®been weathering for years. Raw planks make up the trestle table that sits under the semi-covered deck ‚Äì a cool spot for alfresco summer dining. The pool surround extends slightly beyond the deck perimeter, creating the impression that it stretches out to sea. Sustainable design and family versatility were the key drivers behind this New South Wales Sky House, designed by Marra + Yeh...

Whether you're the kind of traveler whose trips are governed by historical sites and monuments, culinary offers, or your hedonistic side...

Getting thoroughly lost was what led this Cape Town couple to find their dream holiday destination, it turns out. Renee and Pedro De Sambento had spent months exploring properties up the West Coast, an arid, sun bleached stretch that hugs the icy Atlantic Ocean to the north of the Mother City. On one of their weekend property hunting expeditions a wrong turn led them to the Rocherpan Nature Reserve and an isolated plot with a ‚Äòfor sale‚Äô sign. Within days it was theirs.

Casa Sanchia, named after their eldest daughter (their pad in town is called Casa Luz after their next born) may be a new build, but the whitewashed walls, the sandblasted, twisted myrtle tree pergola that graces the deck and the practical design make it feel as if it has been resting in these dunes for decades.

With no other homes in sight, and the beach a short hop from the front door, architect Marco Bezzoli from Archilab and Renee wanted to infuse the home with panoramic views. Otherwise, the brief was to create easy, open plan living that could comfortably accommodate a growing family and endless rounds of friends. The space is bright and breezy thank to high ceilings, exposed roof beams and raw grey concrete floors. A vast central living, dining space and open kitchen form the heart of the cottage and enjoy sweeping views of the coast, but the main bedroom and en-suite guest bedrooms also spill onto the lower deck.

A well-timed trip to Bali proved to be an inspiring experience ‚Äì and a solution to their interior decorating woes. ‚ÄòThe furniture at the hotel we were staying in was perfect. We asked the hotel manager and he gave us contact details of his supplier. We went to their factory and were able to order everything we needed, just as we wanted it,‚Äô says Renee. ‚ÄòI wanted the cottage to be organic and elegant, and not too beachy. I also wanted it to feel South African, rather than African,‚Äô she says.

Years of working on fashion shoots and advertising campaigns has taught Renee the beauty and power of light, and she wanted the cottage to look as beautiful at night as it did in daylight. ‚ÄòAmbiance is important. I spent a lot of time planning the lighting. Every room has a unique chandelier designed for it giving it it‚Äôs own identity and story.‚Äô

Time at the cottage is divided between long ambles on the beach and relaxing around the pool. ‚ÄòWe have a tradition that our first morning there we go for a walk after breakfast in our pajamas. You can walk for an hour and see nothing around you,‚Äô says Renee. It has proven to be a place where the family can get lost in time, even if it is only for a few days at a time The kitchen is designed for lazy breakfasts and entertaining and leads on to a courtyard and barbeque area. Plastic chairs were given a second life with white cotton covers, and now live alongside a rustic table made by a local, West Coast carpenter, Oom Johan Swartz. The chandelier was built for Renee by a friend using shells collected from her travels and drift wood, and is interwoven with fairy lights, transforming the kitchen into a wonderland at night. ‚ÄòI wanted the light to look like an upside down boat, and that‚Äôs exactly what he built,‚Äô says Renee. Renee refashioned store-bought bar stools with wooden seats. Calling on her creative contacts, the stainless steel potholders were made by a family friend. This West Coast cottage began as a ‚Äòparty getaway‚Äô for the couple, but has become a weekend refuge for their family of four and friends. ‚ÄòWe add a row of pictures every year,‚Äô says Renee. Thanks to postcard views from every corner of the cottage, the walls have been left bare of distracting artworks. However, Renee stumbled across this photograph of a young girl taken in the 1920s and fell in love with it. It rests amongst a selection of succulents on a trestle table made by a local craftsman, Oom Johan Swartz. The main bedroom also leads onto a deck that overlooks the ocean. The enormous tiered white leather chandelier in Pedro and Renee‚Äôs room was made by The African Queen Studio. The nutritional biochemist has caused outrage after using an offensive word in her new book...

The Rise Of The Themed Hotel Room

Sometimes a hotel room is just a place to rest your head for the night. There's a bed, a desk, a...