A summer cruise from Auckland to Sydney on MS Oosterdam rewards passengers with dramatic fiordland scenery as well as carefully planned excursions through picture-perfect harbours.

We board Holland America’s impressive MS Oosterdam in Wellington. The 1916-passenger ship hugs the pretty harbour, all wooden walkways and cutting-edge architecture. Despite being a mid-sized ship, Oosterdam feels spacious, with large lounge areas, ample bars and plenty of places to relax. Staterooms are generous and most have private balconies – the perfect place to perch and while away the hours on our two-week cruise south, taking us through New Zealand’s jaw-droppingly beautiful fiords before heading on to Sydney.

Launched in 2003, Oosterdam provides all the amenities and activities expected by premium cruise aficionados. Still, at the end of the day, it’s all about the scenery.

“Our guests choose to travel with us because we are very destination focused,” says Jerrol Golden, international public relations manager for Holland America Line. “On this trip from Auckland to Sydney we visit 10 different ports.”

The cities and towns on our New Zealand itinerary are tucked into picturesque bays and folds of rugged coastline across the North and South Islands. On reaching Australia, we are due to call in at Hobart and Melbourne before disembarking in Sydney.

There’s a huge choice of shore excursions on offer and passengers are encouraged to book well in advance. For those feeling active there is river rafting, hiking and cycling; more sedate experiences include Maori cultural tours, architectural walks and delightful vineyard lunches.

Along the way, highlights include Napier in the Hawke’s Bay, renowned for its proliferation of Art-Deco buildings, constructed after the devastating earthquake in 1931.

Akaroa, a little French-flavoured town near Christchurch, lives up to its charming reputation. Small excursion boats ferry us to shore from the Oosterdam and we glide to the shore surrounded by towering cliffs, with sea birds and dolphins playing around us.

Colourful cottage gardens and painted wooden buildings delight the photographers among us, once we reach dry land. Rather than catching a coach to explore the countryside, we stay in town for lunch. We meet a French woman making crêpes in front of her restaurant; she lures us in, but we opt for a steaming bowl of excellent chowder, brimming with local seafood.

Dunedin takes its Scottish heritage very seriously, and we can’t avoid the sound of bagpipes as we drive through the city on the way to Natures Wonders, a private conservation park with a wild coastline – it’s home to nesting penguins and frolicking seal pups.

Everyone loves the day spent in Fiordland National Park, gliding past glaciers and snow-capped mountains through waters home to whales, dolphins and sea lions. The weather is cold and Dutch pea soup is served to those on deck. Captain Henk Draper tells us this is a Holland America tradition and that the kitchen team use his mother’s recipe.

While our time on land has been filled with adventure, I love the few peaceful days we spend at sea, crossing the Tasman. Walking the Promenade Deck to look for whales and watching the ship’s mesmerising wake spreading like lace over the green water, I meet with an excited passenger who tells me he’s just seen an albatross flying alongside the ship, its wings almost touching the deck railing.

On these days away from land, many passengers like to curl up and watch the world drift by. But should you wish to be entertained, there are activities to fill every moment, such as cooking demonstrations, didgeridoo lessons and history lectures; you can dance with the stars or chip golf balls with a pro.

Once in Hobart, we head to the Museum of Old and New Art (MONA). An extraordinary gallery located on the Derwent River, it includes a collection dedicated to sex and death.

Oosterdam has four restaurants overseen by the company’s executive chef, Rudi Sodamin. It’s casual buffet dining indoors and around the pool at the Lido, while the Vista Dining Room is more formal and the domain of friendly waiters. The upscale Pinnacle Grill has an elaborate frieze of characters looking down on fortunate diners, while Italian restaurant Canaletto has a simpler menu with share plates.

Oosterdam’s menu direction is partly determined by a team of celebrated international chefs who together form a Culinary Council. A new appointment to this prestigious group is Australian chef Mark Best, who has award-winning restaurants in both Sydney (Marque) and Melbourne (Pei Modern). A special feature of Holland America Line ships is the Culinary Arts Centre, where guest chefs give demonstrations and workshops. We are thrilled to have British-born, Australia-based chef Sean Connolly on our cruise. With restaurants in both Auckland and Sydney, Connolly’s classes are a sell-out.

Arriving in Australia’s largest city is a breathtaking way to end the cruise. Oosterdam glides through the Sydney Heads and into the harbour. Passing the Opera House as the sun rises, we stand on our balcony and hear discreet clapping from our fellow passengers.

Holland America Line will have two ships based in Australia from November 2014 to March 2015. The MS Oosterdam and the MS Volendam have various itineraries that include ports in Australia and New Zealand. Prices for a 14-day cruise from Auckland to Sydney (or the reverse) start from $1398 per person.

All extras purchased on board such as drinks, spa treatments and shore excursions are billed in US dollars. Gratuities are not expected as there is a daily service charge added to the bill at the end of your cruise. hollandamerica.com. “Everything tastes better cooked on the bone or in the shell,” says Oosterdam guest chef Sean Connolly. With restaurants in New Zealand and Australia, Connolly is also behind a new hamburger joint in Sydney, and is set to add an Italian eatery to his Auckland portfolio. With his Yorkshire accent and amusing anecdotes, Connolly is a lively presenter. “I like to take homey dishes and bling them up a bit,” says Connolly. Dishes such as Lemon Delicious Pudding and Duck Fat Chips are sampled, with recipe cards to take home. 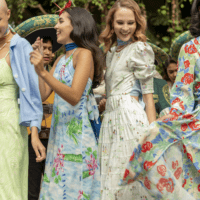 A Voyage of Discovery: Bee Shapiro On Launching Her Clean Fragrance Line

Netflix is developing a feature film based on Jessica...

Netflix is developing a feature film based on Jessica... more
more

Thousands die on voyage to freedom