Over the few past weeks, Lady Gaga has been turning heads with her extravagant red carpet looks â€“ you can check out a few of our favourites here and here.

But on Monday, at Elle magazines 25th annual Women in Hollywood event, Lady Gaga eschewed her usual flamboyance in favour of a menswear-inspired oversized Marc Jacobs suit. While the suit had us head over heels the moment we spied it on the red carpet, it turns out there was a whole lot more to Gaga’s fashion choice for the evening.

Gaga addressed the audience telling them that she tried on several dresses from Dior, Rodarte and Calvin Klein in preparation for the gala, but in the end, it was the oversized Marc Jacobs suit that she opted for because “I felt like me.”

“I tried on dress after dress today getting ready for this event, one tight corset after another, one heel after another, a diamond, a feather, thousands of beaded fabrics and the most beautiful silks in the world. To be honest, I felt sick to my stomach. And I asked myself: What does it really mean to be a woman in Hollywood?” she explained to the audience which included the likes of Charlize Theron and Sarah Paulson. “We are not just objects to entertain the world. We are not simply images to bring smiles or grimaces to peopleâ€™s faces. We are not members of a giant beauty pageant meant to be pit against one another for the pleasure of the public. We women in Hollywood, we are voices. We have deep thoughts and ideas and beliefs and values about the world, and we have the power to speak and be heard and fight back when we are silenced.”

Gaga then opened up about her experience with mental illness and as a survivor of sexual assault. “As a sexual assault survivor by someone in the entertainment industry, as a woman who is still not brave enough to say his name, as a woman who lives with chronic pain, as a woman who was conditioned at a very young age to listen to what men told me to do, I decided today I wanted to take the power back. Today I wear the pants.”

It’s been a long wait â€“ the collab was first announced back in April â€“ but the full lookbook for H&M’s designer collaboration with MOSCHINO is finally here.

Positivity, love and diversity are at the heart of the collection designed by MOSCHINO’s creative director Jeremy Scott. â€śWhenever I design, I think about my friends. The MOSCHINO [tv] H&M lookbook is like a party; celebrating the fun, the pop, the creativity and the energy of the people and the collection,â€ť says Jeremy Scott, creative director of MOSCHINO. Wearing the high energy MOSCHINO [tv] H&M collection, with all of MOSCHINOâ€™s pop glamour, street attitude, humour are among others Aquaria â€“ winner of RuPaulâ€™s Drag Race season 10; Amiaya â€“ twins and
influencers Aya and Ami; Sakura Bready â€“ Jeremy Scottâ€™s assistant at MOSCHINO and Pablo Olea â€“ Jeremyâ€™s best friend and Head of Global PR and Communications of MOSCHINO.

As for the collection itself, pop culture fans won’t be disappointed with Disney characters such as Mickey Mouse, Minnie Mouse and Daisy and Daffy Duck all making an appearance. Never one to do things in halves, Scott has ensured there’s plenty of his signature penchant for bold colour, out-there-prints and daring cuts and silhouettes included in the collection.

â€śI love how Jeremy captures the spirit of MOSCHINO [tv] H&M in the lookbook. This is a loud and proud collection for everyone to share in the fun, no matter who you are or where you are from,â€ť says Ann-Sofie Johansson, H&Mâ€™s creative advisor.

Discover our favourite looks from the collection in the gallery below. 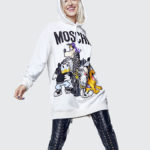 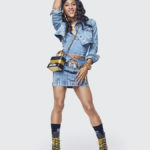 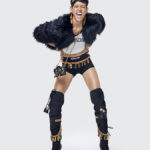 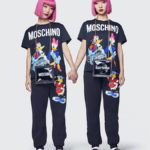 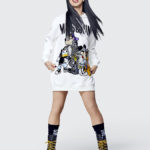