How this new program is bringing joy to aged care homes. And the chickens are pretty happy about it too.

Loneliness is a constant battle for many people, particularly those who live in aged care. Often they are forced to relocate and pack up their lives, leaving any furry friends behind.

Now, in an Australian first, a new creative ageing program is being trialled in New South Wales, which brings all the benefits of pet therapy into selected nursing homes. Aptly named “HenPower”, the program is run by The Whiddon Group, and is based around creative activities, arts, socialisation and “keeping chooks”. The program is run by residents, staff and volunteers at Whiddon’s residential care homes in the communities of Bourke, Maclean and Condobolin.

HenPower was first developed by the British organisation, Equal Arts, and has been successfully running in the UK for more than two years. This trial has shown numerous health and wellbeing benefits including improved general health and well-being of residents, significant reduction of depression, reduction of loneliness and the empowerment of older people to build positive relationships. 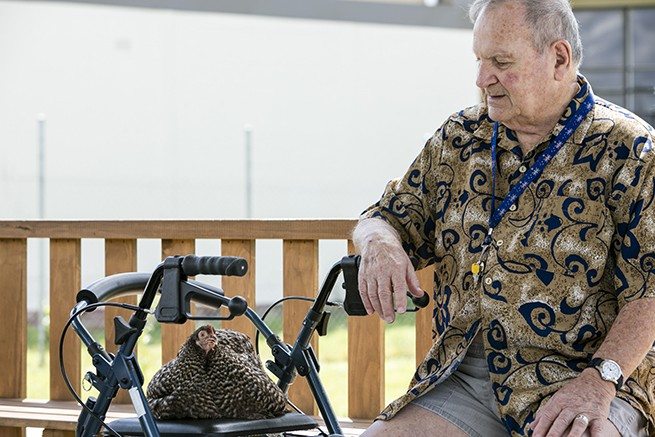 Whiddon Casino activities coordinator Jeremy Watson-Hunt told the ABC that the program was having particular benefits for residents showing symptoms of dementia. “What we’re trying to do is reintroduce that giving and receiving of care. It gives them a sense of purpose,” he said. “They’ve got someone to talk to, to hold and to care for, and it does make a big difference.”

Aubrey Lavis is a resident of the Whiddon Group’s aged care home in Casino. He has formed a particularly special relationship with a bantam named “Priscilla”. “She’s just special,” he said. “I can talk to her and she talks back to me.”

The Whiddon Group is in the process of formally evaluating the trial.

Caring for Elderly Taking a Toll on Families

New research reveals the real cost of caring for elderly...

The hidden faces of homelessness

The image of homelessness often focuses on men sleeping...