As temperatures continue to drop, you may be thinking about ways to warm up your home in time for winter.

A simple way to do this is to lay rugs in your rooms. Not only will they offer softness and comfort for your feet, but they will create a barrier between you and the cold floor.

Plus, a rug can help to improve the cosy ambiance of a room, particularly if you choose a plush style.

Here are some great options from Source Mondial for warming up floors during the cooler weather: Summer Lights from the Checkerboard Collection is made from hand-knotted NZ wool and features 121 colours – a great way to add warmth while still maintaining vibrancy in a space. The hand-knotted Hemp Checkerboard from the Checkerboard Collection features comforting, autumnal tones that are perfect for the season. Kashkuli from the Striped Collection is another piece showcasing vivid hues in hand-knotted wool thatŌĆÖs sure to be an eye-catching addition to any room.

Source Mondial stocks a number of runners but also makes a large number to order so as to meet your specific width and length requirements, as well as your style and composition expectations. A runner can help to give guests a bold first impression of your home. The Athens style is sure to add character to your hallways. The Warwick in handwoven wool is a classic style that will be seamlessly incorporated into your home decor. The Lillieshall comes in a unique pattern, while the navy colour is a timeless choice that wonŌĆÖt clash with your other furniture.

Source MondialŌĆÖs coastal collection is a great option for a more relaxed vibe with its chunky textures and natural fibres. The neutral greys of the Massachusetts rug (also pictured at header) fit with a range of interiors and work to ground a space. The striped pattern of the Oneroa rug never goes out of style and can help to make a room feel bigger. Warwick runners donŌĆÖt have to be confined to the hallway – they make a tasteful addition to a living room too. 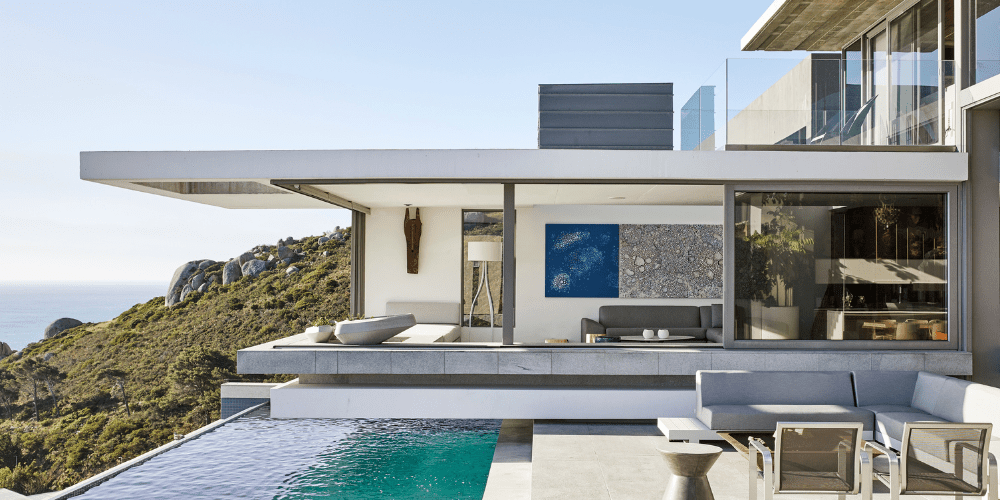 House Tour: The Breathtaking Mansion Clinging to a Clifftop

“IŌĆÖve always wanted to be in Clifton,ŌĆØ says Cape Town architect Stefan Antoni. ŌĆ£ItŌĆÖs one of the most beautiful places in the world.ŌĆØ He should know. Over the course of his career, Antoni has designed more than a few sea-facing houses along the cityŌĆÖs Atlantic seaboard, and has earned himself something of a reputation as a master of design when it comes to the sought-after houses clinging to the mountainside overlooking the ocean.

In fact, it was while he was visiting a site in Clifton where he had designed a house for a client that he spotted the stand where he recently built his own house on Nettleton Road. ŌĆ£I looked up and saw a for-sale board that had fallen down on its side,ŌĆØ recalls Antoni. Not knowing whether the stand was still available or not, he called the number and, when he found that it was, nabbed it as fast as he could. When it came to designing his own home, where he now lives with his wife Carla and their two children, Gia and Luke, however, he didnŌĆÖt necessarily stick to his tried-and-tested methodologies. ŌĆ£I thought, itŌĆÖs my own house, I can experiment here!ŌĆØ says Antoni. But first he had to deal with the practicalities of the site.

It had breathtaking ocean views and backed right onto LionŌĆÖs Head, the mountain behind it, but it was a tricky piece of land to build on. ŌĆ£ItŌĆÖs very steep,ŌĆØ explains Antoni. The ground rakes up sharply from the street, which meant that he had to come up with something smart if it wasnŌĆÖt going to be another bland white box on the mountainside. ŌĆ£The crucial starting point of the design was to get the house to relate to the mountain,ŌĆØ he says.

This solution also sidesteps the dreaded alternative of ŌĆ£an enormous dark retaining wall at the back of the houseŌĆØ. ŌĆ£For me, it was very important to have a garden with a lawn and some trees because I have a 10-year-old son and weŌĆÖre always playing soccer or cricket or rugby,ŌĆØ says Antoni. Once heŌĆÖd created a platform for this top level, he designed a zig-zag arrangement for the living areas, one portion cantilevering over a rim-flow pool, which seems to extend seamlessly into the blue of the ocean, and another portion extending to the back of the site. ŌĆ£This arrangement provides for a north-facing garden, which is quite rare in Clifton,ŌĆØ he says. ŌĆ£The way that IŌĆÖve modulated it, it creates a wind-free zone, so that worked out very nicely.”

The resulting height of the building meant that he could create a wonderful interplay of vertical levels, volumes and light. ŌĆ£The house is broken into four portions,ŌĆØ he explains. At street level, the garage and entrance. Next, a couple of guest bedrooms. Then, in the middle, a games room and, just above it, the bedrooms, linked vertically by a huge 12-metre double volume space. On the top and set back is the living space: lounge; kitchen; dining room.

The vertical connections help to integrate the house and hold it together, so even if theyŌĆÖre on different levels, the family seldom feel cut off from each other. ŌĆ£You want to be part of the greater experience,ŌĆØ says Antoni. ŌĆ£When the kids and their friends are in the games room, you can lean over the balustrade and call to them. We never want to feel isolated from them.ŌĆØ The fa├¦ade, too, needed something to unify it. ŌĆ£Because every level is made up of two levels,ŌĆØ says Antoni, the balconies and windows opened only at every second level, which he points out would have looked ŌĆ£really weirdŌĆØ from the outside. He felt the fa├¦ade needed something to ŌĆ£pull the whole structure togetherŌĆØ.

He didnŌĆÖt want the house to appear large or looming, however, or ostentatious. His solution was to clad it with a laser-cut aluminium screen, which, ŌĆ£consolidates itŌĆØ. ŌĆ£ItŌĆÖs peeled open to allow the bedroom level to have a view,ŌĆØ he points out. ŌĆ£Then, on the level below that, which is the games level, thereŌĆÖs a glass box that slides out. The fins create a sense of mystery, projecting forward and peeling backward. The ŌĆśeyebrowŌĆÖ of the pool lounge, which slides over the pool, peeps over the top of the fa├¦ade and gives you a sense of floating space on the top level.ŌĆØ

The pattern on the fa├¦ade is an abstracted graphic interpretation of the ŌĆ£landscape around and up on the mountainŌĆØ. ItŌĆÖs designed to soften the appearance of the building and help it recede into the surrounding landscape without being literal or over-determined.

Partly because of the strong presence of the mountain and the ocean, and partly because of his personal taste, Antoni wanted a building with primal qualities. ŌĆ£I love ancient monuments and raw, simple spaces,ŌĆØ he says. ŌĆ£I chose quite specifically to go with quite raw, robust materials and textures. ŌĆ£ItŌĆÖs really about sculpting space: to make the rawest, most beautiful space that allows the indoors and outdoors to coexist,ŌĆØ he says. ŌĆ£For me, and for my family, the house is just a vessel in which to experience the mountain and the view and the incredible trees outside.ŌĆØ Of course, the best way to articulate raw textures and capitalise on their expressiveness is to include contrasts: think sleek, sophisticated balustrades and handrails playing off the raw concrete and simple masses and volumes with a gallery-like quality. Antoni explains that the wooden planks used for the shuttering for the board-pressed ceiling in the living room were ŌĆ£brushed down a little bitŌĆØ and used for the ceiling on the level below. ŌĆ£We stacked them up and down slightly with the grain very evident,ŌĆØ he says. ŌĆ£It definitely had a certain lightness and delicacy about it.ŌĆØ

The living space upstairs can be opened up almost completely. The glass walls are sliding doors that disappear into cavity walls. When theyŌĆÖre open, the living space is transformed into a pavilion. ItŌĆÖs as if the presence of the mountain behind pours into the house. ŌĆ£It feels like this plane that just slides in from the mountain into the back garden, through into the house and then out to the terrace and the pool, where it joins the ocean,ŌĆØ says Antoni.

But the house is not just about open spaces. ŌĆ£I always like the mystery of one space leading to another without completely revealing itself,ŌĆØ he says. ŌĆ£ItŌĆÖs all about volumes sliding though each other. It adds a little bit of fun to the whole experience, because architecture has to be about delight, otherwise itŌĆÖs purely utilitarian. Here, I wanted to play with the person experiencing it, always unravelling a couple of surprises.ŌĆØ

Antoni has been very clever about the natural light. Some of what heŌĆÖs done is pragmatic: the ocean views in Clifton face west, which means exposure to the afternoon sun. ŌĆ£ItŌĆÖs very important that when the late afternoon sun comes around, you can retreat to other places in the house,ŌĆØ says Antoni. ŌĆ£On our living level we have very few blinds, but we donŌĆÖt need them because we always have spaces where we can go to that are beautifully shaded.ŌĆØ

HeŌĆÖs also created skylights and glass slot windows that allow natural light to pour in from unexpected sources ŌĆō orchestrating what Antoni calls ŌĆ£the mystery of lightŌĆØ. The skylight against the wall of African masks in the living area is a perfect example. ŌĆ£As the light gets more and more vertical, it strikes those masks, and they become very animated because theyŌĆÖve got these deep, strong shadows.ŌĆØ As a collector of art and design objects, Antoni hasnŌĆÖt designed the interiors with any finite end in mind. Rather, the whole idea was to design a space that could keep evolving. ŌĆ£I didnŌĆÖt want it matched to perfection,ŌĆØ he says. ŌĆ£It had to have a certain arbitrary, collected quality.ŌĆØ ŌĆ£It is almost like a gallery. ItŌĆÖs a house where you can keep on collecting and changing over time. And thatŌĆÖs what I enjoy about it. Very little is ever collected consciously for a space. It moves around and moves around until we think weŌĆÖve found the right place, and even then, it moves around thereafter as well.ŌĆØ

Antoni has a fondness for mid-century modernist design and art. ŌĆ£The house is unashamedly modernist,ŌĆØ he says. The artworks, too, trace his interest in modernist aesthetics, as do some mid-century furniture pieces. There are artworks by the likes of Cecil Skotnes, the most noteworthy being a large tapestry that once hung in the President Hotel in Johannesburg.

It represents a particular history of African modernism, which, in turn, Antoni says, traces his own ŌĆ£personal little journey of discoveryŌĆØ ŌĆō that is, an exploration of modernist African aesthetics. ŌĆ£The art and architecture enhance each other,ŌĆØ he elaborates.

ŌĆ£The two play off each other beautifully.ŌĆØ The house has become a journey of discovery as well: an opportunity for Antoni to pursue his own aesthetics. The result is not just a comfortable family home, but also an exciting architectural exploration.