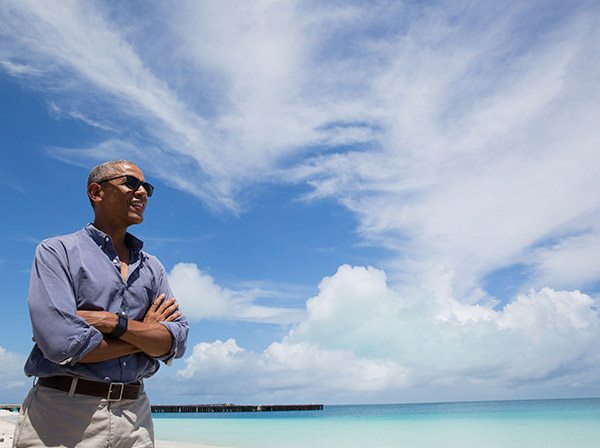 Barack Obama has made history, creating the largest marine protected area on the planet.

As the world sits in anguish while the United States prepares to vote in their new President in 30 day’s time, the current man in charge has added one more legacy just in time for his presidency to come to an end. Barack Obama has made history, creating the largest marine protected area on the planet.

The White House announced, the president who has protected more public area than any other U.S. presidents plans to quadruple the marine monument surrounding the remote North-Western Hawaiian Islands. Taking effect this Friday, the Papahānaumokuākea Marine National Monument will expand from 224 981 square kilometres to 937 568 square kilometres.

The White House said the move “provides critical protection for more than 7,000 marine species, including federally protected monk seals, whales and sea turtles, as well as black coral ― the longest-living marine species in the world.”

Sen. Brian Schatz (D-Hawaii), who introduced the proposal in June, called Obama’s move “one of the most important actions an American president has ever taken for the health of the oceans.”

“Expanding Papahānaumokuākea will replenish stocks of ‘ahi, promote biodiversity, fight climate change, and give a greater voice to Native Hawaiians in managing this resource,” Schatz said Friday in a statement. “This declaration sets us on a strong path forward for our irreplaceable environment and the generations to come.”

Matt Rand, the director Pew’s Global Ocean Legacy project, an initiative that works alongside scientists, Native Hawaiian’s and community leaders to push for marine protection, told the Huffington Post. “ This is a big deal for the planet. I hope not only does it protect the ecosystem, but I hope it inspires the world.”