Meghan, Duchess of Sussex, during a walkabout in Rotorua on day four of the royal couple’s tour of New Zealand October 31, 2018. Dominic Lipinski/Pool via REUTERS

In case you missed it, Meghan Markle wore a see-through skirt on her last day in New Zealand.

The Duchess of Sussex – formally Meghan Markle – made headlines after she wore a navy sweater and pleated skirt by Givenchy to her walkabout of Rotorua, New Zealand with Prince Harry on Wednesday. 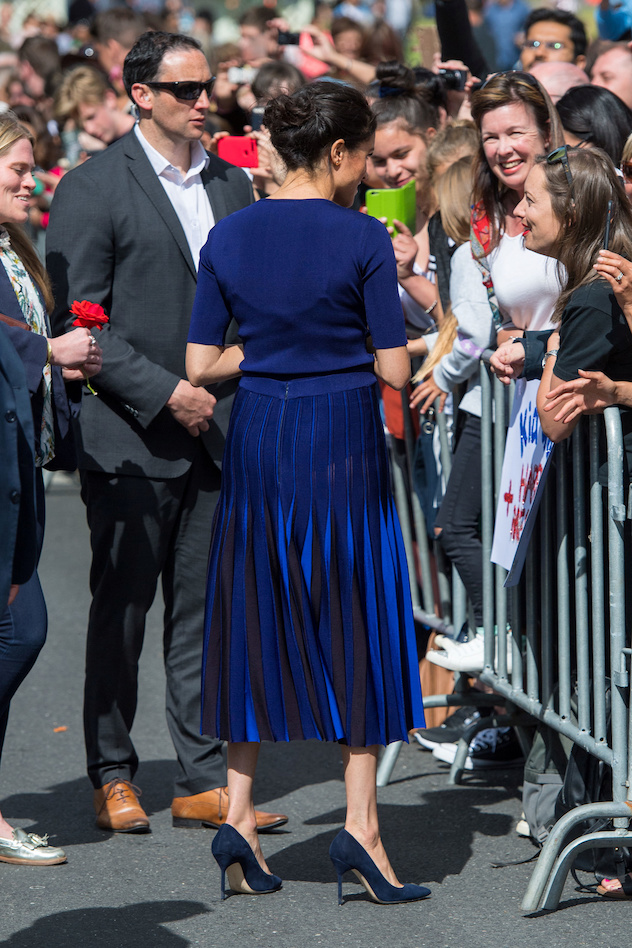 Meghan, Duchess of Sussex, during a walkabout in Rotorua on day four of the royal couple’s tour of New Zealand October 31, 2018. Dominic Lipinski/Pool via REUTERS

It’s unclear whether this skirt was intentionally sheer or not, but either way the Duchess looked incredible in it as she smiled and greeted fans in the crowd. She accessorised her outfit with navy suede Manolo Blahnik BB pumps and Boh Ronga Disco Logo gold studs.

The Duchess didn’t seem phased by it and even went down to hug a 2-year-old, Catalina Rivera, who got through the railings. Prince Harry also took part in greeting the crowd during the walkabout.

Earlier in the afternoon, after attending a traditional pōwhiri and luncheon to kick off the final day of their tour, the Royal couple were spotted walking hand-in-hand while visiting New Zealand’s Redwoods Treewalk Rotorua, where the Duchess kept warm in Prince Harry’s Norrøna Oslo jacket. The final day in New Zealand also saw them head to Rainbow Springs to learn more about the centre’s kiwi breeding initiative. Kiwis, which are New Zealand’s national bird, have become increasingly endangered in recent years, as most chicks struggle to survive in the wild. Britain’s Prince Harry and Meghan, the Duchess of Sussex look at kiwi chicks as they visit the National Kiwi Hatchery at Rainbow Springs, Rotorua. REUTERS/Phil Noble/Pool

In addition to seeing a newly hatched kiwi, the parents-to-be were given the chance to meet two young kiwi chicks named Tihei (which means “sneeze of life” or “life force” in Māori) and Koha (meaning “gift”).

German police have discovered a cellar during a search of...

German police have discovered a cellar during a search of... more
more