Businessman-turned-politician Donald Trump has promoted "America First" nationalism, withstood impeachment and a bout with COVID-19, and taken contentious stands on race and immigration during a turbulent presidency that detractors say has flouted U.S. democratic norms.

After decades of fame first as a brash and media-savvy New York real estate developer and then as a reality TV personality, the pugnacious Trump tapped into discontent among many Americans to become a political phenomenon unique in the country’s 244 years.

Trump initially encountered fierce resistance within the Republican Party but managed to remake it in his own image and won loyalty even among some Republicans who had once denounced him.

On Twitter and in raucous rallies, Trump eviscerated opposition Democrats and the news media as well as some fellow Republicans, Cabinet members and other officials he appointed.

“If I don’t sound like a typical Washington politician, it’s because I’m not a politician,” Trump told an Oct. 26 rally in Pennsylvania.

Trump, 74, assumed the presidency in January 2017 after his surprise victory over Democrat Hillary Clinton in November 2016. He lost the nationwide popular vote by about 3 million ballots but prevailed in pivotal battleground states to amass an Electoral College majority. 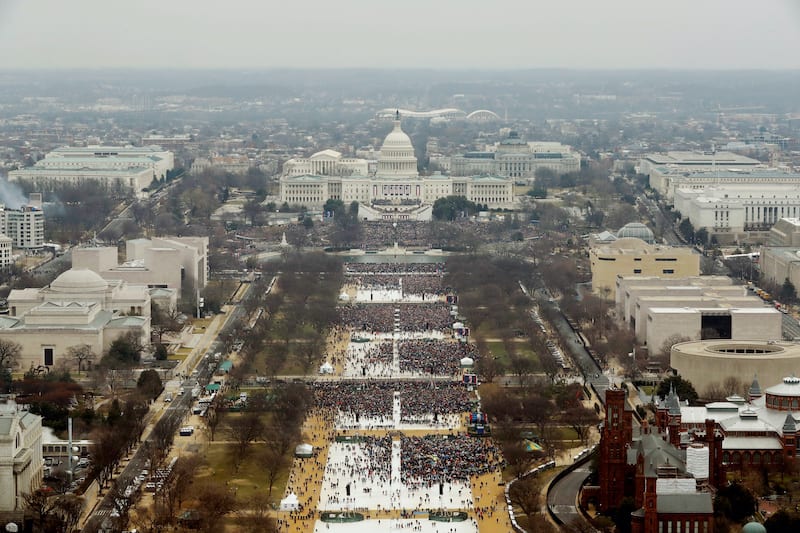 Attendees partake in the inauguration ceremonies to swear in Donald Trump as the 45th president of the United States at the U.S. Capitol in Washington, U.S., January 20, 2017. REUTERS/Lucas Jackson

His 2016 victory made him the first U.S. president with no prior political or military experience as he pursued a right-wing populist approach. Trump’s ascent was part of a populist wave extending from Britain’s European Union “Brexit” to the election of Brazilian far-right leader Jair Bolsonaro. Trump denounced “globalism” and focused U.S. foreign policy around an “America First” world view.

His presidency came at a time of deep polarisation in the United States and political dysfunction in Washington.

At home, Trump curtailed legal and illegal immigration and slashed the number of people admitted as refugees and asylum seekers, secured sweeping tax cuts, moved the federal judiciary including the Supreme Court dramatically rightward and rolled back environmental regulations that he called burdensome. He showed deference to longtime U.S. adversary Russia and its president, Vladimir Putin. U.S. intelligence agencies concluded that Russia used a campaign of hacking and propaganda to boost Trump’s 2016 candidacy and that Moscow was interfering again during the 2020 campaign to try to denigrate Biden. Critics including senior Democrats and former members of his own administration portrayed Trump as a peril to democracy with autocratic tendencies.

“I believe that the president is literally an existential threat to America,” Biden said of Trump last year in Iowa. “This is a guy who does everything to separate and frighten people. It’s about fear and loathing.”

“Donald Trump is the first president in my lifetime who does not try to unite the American people – does not even pretend to try,” Jim Mattis, a retired four-star Marine Corps general who served as Trump’s first defence secretary, said in June. “Instead he tries to divide us.”

But even through a parade of controversies, the passionate support of many Americans – especially white men, Christian conservatives, rural residents and people without a college education – seemed undimmed.

“I have joined the political arena so that the powerful can no longer beat up on people that cannot defend themselves,” Trump said in accepting the 2016 Republican presidential nomination. “Nobody knows the system better than me, which is why I alone can fix it.”

Democrats accused Trump of placing himself above the law and disregarding constitutional constraints on presidential powers as he ignored congressional subpoenas, complained about a “rigged” American voting system, refused to commit to a peaceful transition of power if he lost to Biden, and assailed figures in the FBI and U.S. intelligence agencies. Speaker of the House Nancy Pelosi (D-CA) rips up the speech of U.S. President Donald Trump after his State of the Union address to a joint session of the U.S. Congress in the House Chamber of the U.S. Capitol in Washington, U.S. February 4, 2020. REUTERS/Jonathan Ernst

Critics also denounced Trump for employing falsehoods; fact-checkers listed thousands of them during his presidency.

He pushed back at questions about his mental state.

“Actually, throughout my life, my two greatest assets have been mental stability and being, like, really smart,” Trump wrote on Twitter in 2018, describing himself as “a very stable genius.”

At rallies as a candidate and president sporting carefully coiffed golden hair, Trump soaked in the adulation of supporters, many wearing red baseball caps emblazoned with his slogan, “Make America Great Again.” They cheered his taunts against Democrats, liberals and elites, and his attacks on journalists as “the enemy of the people” and “fake news.” 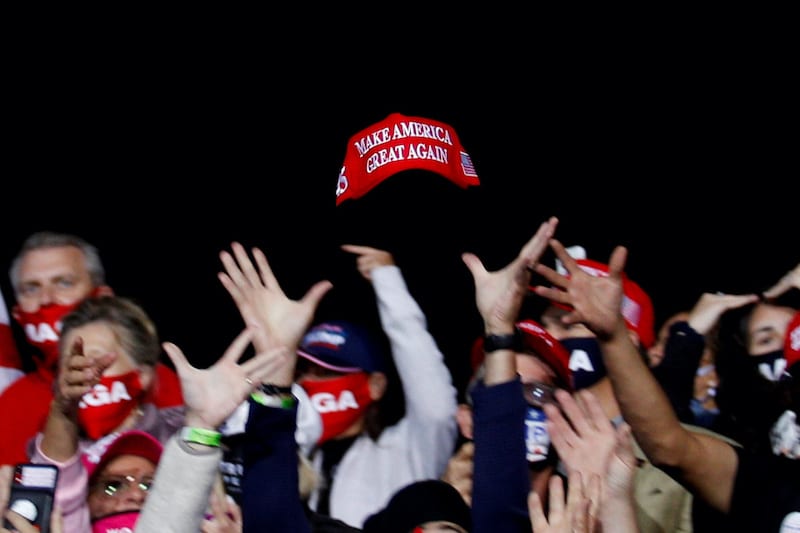 The coronavirus pandemic presented a challenge to Trump.

He cast doubt on protective masks, promoted unproven medicines and predicted the pathogen’s disappearance “like a miracle” – actions that many public health experts said cost lives and contributed to an economic cataclysm. About 230,000 people have died in the United States from COVID-19, with some 9 million confirmed cases in the country since the pandemic began.

Trump, who often ignored mask-wearing and social-distancing advice, disclosed on Oct. 2 that he had tested positive for the virus and then spent three days hospitalised receiving multiple COVID-19 treatments before returning to the White House.

Trump became only the third U.S. president to be impeached when the Democratic-led House of Representatives voted to charge him with abuse of power and obstruction of Congress over the Ukraine matter. The Republican-led Senate kept Trump in office by acquitting him at a trial in February. U.S. President Donald Trump holds up a copy of USA Today’s front page showing news of his acquittal in his Senate impeachment trial, as he arrives to address the National Prayer Breakfast in Washington, U.S., February 6, 2020. REUTERS/Leah Millis Trump called the investigation a “witch hunt” and declared “complete and total exoneration” in 2019 after Mueller’s report did not accuse him or his campaign of a criminal conspiracy with Russia.

Mueller did not exonerate Trump of committing obstruction of justice in trying to impede the investigation, but Attorney General William Barr, a Trump appointee, subsequently cleared him. 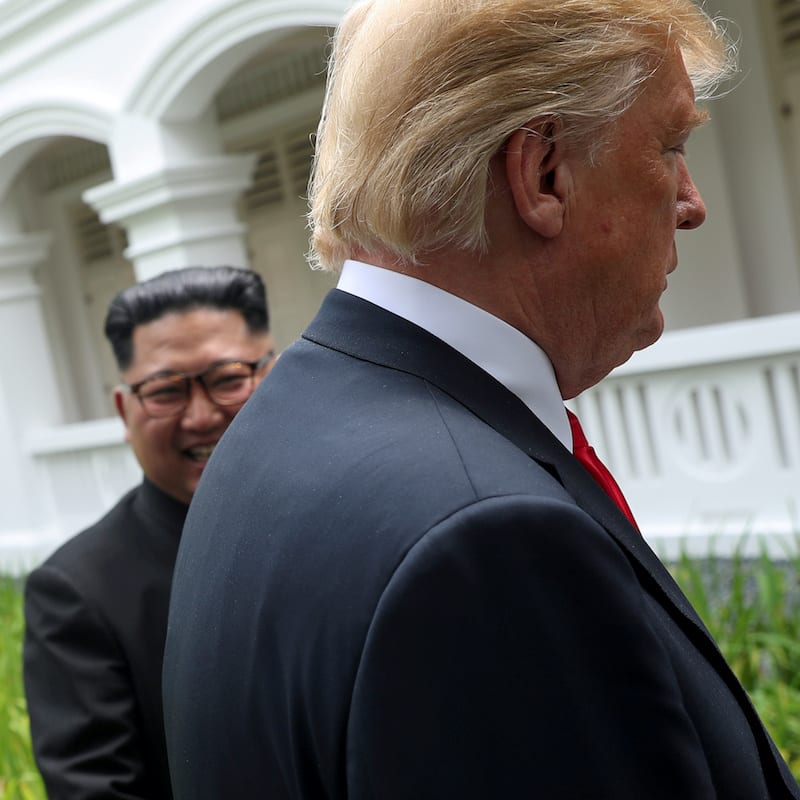 U.S. President Donald Trump and North Korea’s leader Kim Jong Un walk together before their working lunch during their summit at the Capella Hotel on the resort island of Sentosa, Singapore, June 12, 2018. Reuters photographer Jonathan Ernst: “On a historic and difficult day, it was fun to look for the odd angle or expression. Here, Trump and Kim walk away after impromptu remarks to reporters – which clearly pleased the North Korean leader.” REUTERS/Jonathan Ernst

Protests against racism and police brutality spread to many cities, sometimes accompanied by violence and looting, after incidents such as the police killing in May of George Floyd, a Black man in Minneapolis. Trump called demonstrators “thugs,” promised to maintain “law and order” and sent federal personnel onto the streets of some cities. Protesters rally at the White House against the death in Minneapolis police custody of George Floyd, in Washington, D.C., U.S. May 31, 2020. REUTERS/Jonathan Ernst

Critics accused Trump of pursuing policies built around “white grievance” in a nation with a growing non-white population. Even some fellow Republicans expressed unease over Trump’s failure to disavow white supremacists. Having succeeded the first Black U.S. president, Barack Obama, Trump erased many parts of his Democratic predecessor’s legacy. Trump walked away from an international treaty over Iran’s nuclear program and a global accord to battle climate change, reversed environmental protections and rolled back warmer ties with Cuba.

Trump’s hardline stance toward immigration was a hallmark of his presidency.

When he launched his presidential run in 2015, he promised a wall along the U.S.-Mexican border, paid for by Mexico. Mexico refused to pay. One of the first policies he pursued as president was a travel ban on people from several Muslim-majority countries. He implemented a policy of separating some detained immigrant children from their parents. Maria Meza (C), a 40-year-old migrant woman from Honduras, part of a caravan of thousands from Central America trying to reach the United States, runs away from tear gas with her five-year-old twin daughters Saira Mejia Meza (L) and Cheili Mejia Meza (R) in front of the border wall between the U.S. and Mexico, in Tijuana, Mexico November 25, 2018. REUTERS/Kim Kyung-Hoon

Trump cultivated an image of a flourishing businessman and deal-maker, though he had a history of financial losses, bankruptcies and business failures. Tax documents uncovered by the New York Times in September showed Trump paid just $750 in federal income taxes in 2016 and again in 2017 – and no income taxes in 10 of the previous 15 years – mostly because he reported losing much more money than he made.

Numerous women accused Trump of sexual assault, allegations he denied. Trump bragged in a 2005 audio tape made public in 2016 that he could grab women by their genitals with impunity because he was a star. His personal lawyer Michael Cohen pleaded guilty to charges related to hush money paid before the 2016 election to two women – an adult film actress and a Playboy model – who said they had sexual encounters years earlier with Trump. Trump denied the relationships. Adult-film actress Stephanie Clifford, also known as Stormy Daniels, puts her shoe back on after passing through a security screening, as she arrives at federal court in the Manhattan borough of New York City, New York, U.S., April 16, 2018. Reuters photographer Shannon Stapleton: “On the morning that I took this picture there was a mad scrum outside the courthouse to get a picture of Stormy Daniels. She didn’t enter the regular entrance of a media gauntlet that was set up for her. I placed myself by a window where I saw her passing through the metal detector. Shooting through the window was difficult but I was able to make the frame.” REUTERS/Shannon Stapleton