Game for Anything: Five Minutes with Emilia Clarke

Best known as the flaxen-maned Queen Daenerys Targaryen, Emilia Clarke must be ruthless, imperious – even deadly. It turns out that the Game of Thrones wig hides not just her hair, but also her personality, which is about to burst forth in her new film.

The walls of London’s Soho Hotel are reverberating. “Oh my God … yes!” exclaims Emilia Clarke, with raucous enthusiasm. She’s been reminded that the last time we met she was on crutches with a broken hip after falling over running. Not quite what you’d expect from the girl who plays the “Mother of Dragons” Daenerys Targaryen from HBO’s beloved fantasy Game of Thrones, or the all-action Sarah Connor in last year’s Terminator Genisys.

At just 157cm, wearing a mini-dress and beige strappy heels, Clarke is a bundle of sunshine; petite but powerfully voiced. You can hear her all the way down the corridor. “She’s small but she makes a lot of noise,” laughs Thea Sharrock, director of Clarke’s new film, Me Before You. Still, with perfect alabaster skin, dreamy blue-green eyes and her natural brunette bob replacing Daenerys’ flaxen locks, it’s easy to see why British magazine Esquire voted her last year’s Sexiest Woman Alive.

For all her A-list allure, she radiates warmth. That smile is fresh and dazzling. And then there are those thick caterpillar brows of hers, forever dancing around. She admits they can be a problem. “Game Of Thrones, the first day, they were like: ‘Could you just relax the eyebrows?’” she laughs. “My favourite note … all throughout Terminator, I got: ‘Sarah Connor doesn’t smile.’ It just killed me!”

Clarke, 29, is the classic girl next door. The sort you can sink a drink with. Or buy one from. In one of her myriad student jobs, she worked in a bar. “I was a terrible bartender – really bad. I could make one cocktail despite the fact there were 10 on the menu, so I would just give everyone a whiskey sour.”

She’s honest, open-hearted and charmingly silly. “This is the funny, deep, dark secret,” she says, leaning in. “This is me. And all of the strong women I play, I’m winging it!”

It’s why she was delighted when she was sent the role of Me Before You’s Louisa “Lou” Clark. “Such a beautiful opportunity to play a large part of who I am,” she says. “The clumsy idiot!” 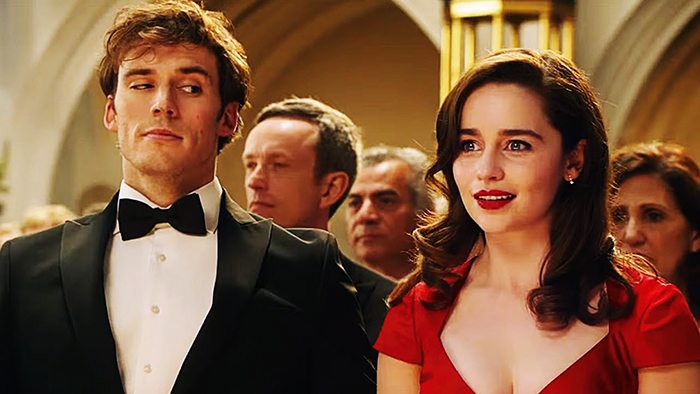 It’s not just that she and Lou (almost) share a surname. “I got sent the book first and I thought: ‘Someone has written me down.’ And so much of the beautiful optimism of the story is what I think anyway.”

Set in England and based on Jojo Moyes’ bestseller, the story sees former waitress Lou take a job looking after Will Traynor (Sam Claflin from The Hunger Games), confined to a wheelchair after being hit by a motorbike. He’s embittered but Lou’s sunny demeanour gradually opens him up and sparks fly. But if you’re expecting a simple boy-meets-girl love story, think again. The film is a heart-wrenching weepie, with Will determined to end his life at Dignitas, the Swiss centre for assisted suicide.

Clarke admits learning about this controversial practice was eye-opening.

“We did so much research to make sure we were being sensitive,” she says. “Hopefully the thing you take away from the movie, is that it’s a choice.” So does she agree with the concept of being able to end your life? She pauses, carefully considering her answer. “I’m probably the leftist person you’ll speak to, so yes.”

“Do you really want to know?”

She is, of course, back on our screens in the sixth season of Game Of Thrones, though sworn to secrecy on plot details. “Six years in, I’m now an old hand [at keeping secrets],” she says. After the tears of Me Before You, Clarke will be going for laugh in The Set-Up, a romantic comedy about two overwhelmed assistants who engineer a hook-up between their bosses. “It’s good,” confirms Clarke. “It’s MGM, so it’ll be big and funny. In spite of my British self, I was like: ‘Okay, I’ll read this script’ – and
then I was laughing and couldn’t stop laughing.” She smiles again. “I do have an unashamed love of romantic comedies.”

There’s also a Hitchcock-inspired 1950s drama Voice From The Stone. The only thing she won’t be doing is continuing as Sarah Connor, after two proposed Terminator films were quietly canned. “I’m pretty realistic when it comes to these things,” she says, unconcerned. “I would like to do as much varied work as possible. Because I feel so lucky to be where I am. I’m like: ‘Right, let’s try a bit of everything. Literally.’

“I just want to see where I land with it. I’m enjoying everything so much. I’m like: ‘Cool – what’s next?’”