The Duchess of Cambridge shared a special moment with a child awaiting a heart transplant.

Yesterday Kate Middleton visited Great Ormond Street Hospital in Camden to open the Mittal Children’s Medical Centre. Dressed in a gorgeous red coat, the Duchess was presented with two teddy bears by nine-year-old Ava Watt on arrival. Ava said the teddies were named Bernard and Wendy and were a gift for Prince George and Princess Charlotte. While touring the hospital, Kate met dozens of patients – but one in particular stood out. Rafael Chana, 4, was waiting for a heart transplant. Kate began chatting to the young patient about food, discovering that his favourite foods were olives and pasta. “I used to eat lots and lots of olives when I was little as well,” Kate told Rafael, adding that “Charlotte likes pasta too.” 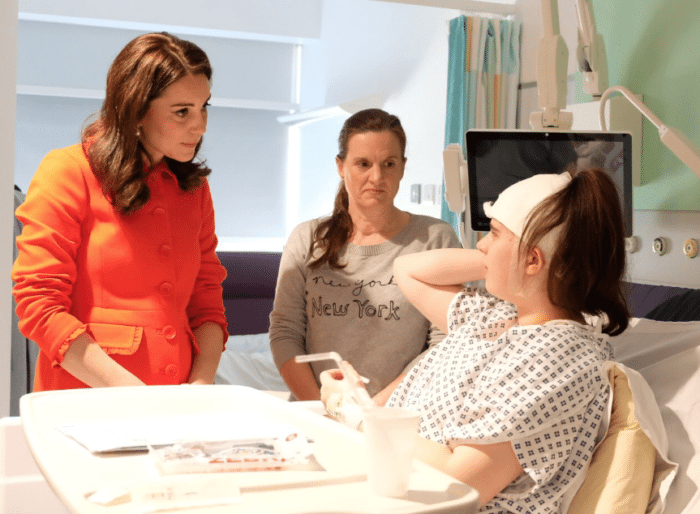 After her tour, Kate spent some time in the children’s playroom where she sat in on an art session and met parents of young patients. Once the opening ceremony had been completed, the Duchess made an earnest speech about her experience. “I just wanted to say a huge thank you for having me here today. It’s been my first trip to Great Ormond Street Hospital and I’ve been so impressed with everything I’ve seen and the scale of the work that’s going on here,” she said. “It’s been wonderful to meet so many families and young people. I’ve been so inspired by their bravery and courage at such a difficult time.”

Watch the Duchess making her speech below.

It's been wonderful to meet so many families and young people. I've been so inspired by their bravery and courage at such a difficult time. – HRH